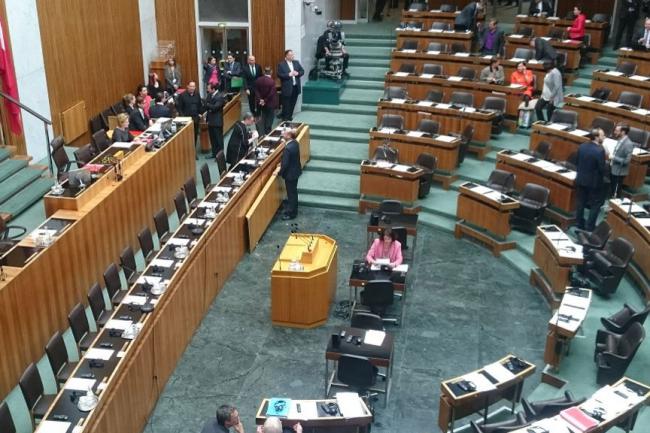 India Blooms News Service | | 29 Apr 2016, 08:09 am
#EU asylum policies, #Ban Ki-moon
New York, Apr 29 (Just Earth News/IBNS): From its leadership on major United Nations bodies to its peacekeepers in the field, development aid and defence of human rights, Austria is a very important, vital member of the world community, UN Secretary-General Ban Ki-moon said during an address to the Parliament of Austria earlier on Thursday in Geneva.

“In the vocabulary of the international community, Vienna and Austria are synonymous with global action,” said the UN chief.

Indeed, the UN convenes major meetings in Austria on issues at the top of the global agenda, including on nuclear energy, drugs and crime, industrial development and more,  Ban said.

In particular, he said that Austria has shown its solidarity through the years to help address the many threats facing the world, including inequality among people and among nations.

Ban said that he had been impressed by the “humane approach” and compassion when Austrians welcomed the latest wave of refugees from Syria and other parts of the Middle East this past autumn. He also highlighted when Austria in 1956 had opened its borders to Hungarians fleeing the “Soviet crackdown,” and was a haven for thousands of refugees during the Balkan wars of the 1990s.

“We have a moral, legal and political obligation to help those fleeing war, human rights abuses and persecution,” the UN chief said. “Our commitment to human dignity is meaningful when we provide shelter, food and a warm welcome to families who have risked their lives in search of peace.”

Recognizing the “generosity” shown thus far by the people and governments of Europe to migrants and refugees, not least in Austria,  Ban said he was concerned, however, that European countries are now adopting increasingly restrictive immigration and refugee policies.

“Such policies and measures negatively affect the obligations of Member States under international humanitarian law and European law,” he said.

“I welcome the open discussions in Europe – including in Austria – on integration. But I am alarmed again about growing xenophobia here and beyond. All of Europe’s leaders should live up to the principles that have guided this continent,”  Ban stressed.

Noting that divisiveness and marginalization “hurt individuals and undermine security,” the Secretary-General emphasized that when the arrival process is well-managed, accepting refugees is a “win” for everyone.

“These are brave, resilient and forward-looking people. They bring needed skills and energy to their new societies,” he said.

As such, while he understood and sympathized with the “enormity of the challenges,”  Ban said he trusted that Austria will continue to contribute towards the European Union’s efforts to forge a “truly cooperative approach” to address the issues.

“The United Nations will persist in forging comprehensive solutions together with the European Union,”  Ban stressed.

In particular, the UN General Assembly will hold a meeting on 19 September to address large movements of migrants and refugees across the world, as well as the need for shared responsibility,  Ban said.

In May, the World Humanitarian Summit in Istanbul, Turkey, will be convened for leaders to make a global commitment to “ending the assaults against innocent people and shared values.”

“The World Humanitarian Summit should send a message of support to the 125 million people in our world who are in immediate crises,” the Secretary-General said. “I count on Austria to engage in these important events – and to reaffirm its proud tradition of openness and solidarity.”

Along those lines,  Ban said that he was “very encouraged” to hear from Foreign Minister Sebastian Kurz that the Austrian Government plans to “dramatically increase its invaluable” official development assistance.

“I count on Austria to create a national plan for the Sustainable Development Goals – and take international action to help others advance. The United Nations bodies based here in Vienna will all support you,”  Ban said.

He also asked the Members of the Parliament to ratify the Paris Agreement on climate change that was signed by 175 countries last week.

“To turn these ambitious plans into actual progress, we need your support,”  Ban said.

“I count on you to build on your relations with the United Nations and your neighbours, near and far, to seize our global chance for a better world. It is your and our common moral and political responsibility to make this world better. All the people, regardless of where you are coming from, ethnicities or religions or whatever difference one may have, we need to live with human dignity. That’s what the United Nations is doing,” he added.