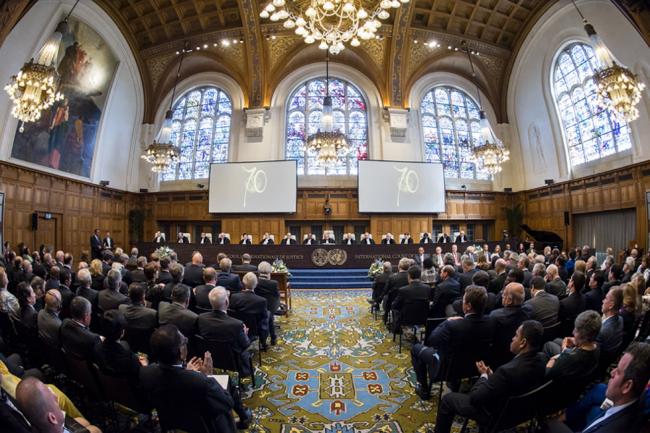 India Blooms News Service | | 21 Apr 2016, 07:41 am
#World Court, # 70th anniversary
New York, Apr 21 (Just Earth News/IBNS): The collective jurisprudence of the International Court of Justice (ICJ) has made an â€œenormous contributionâ€ to international law, benefiting both nations and citizens around the world, Secretary-General Ban Ki-moon said on Wednesday marking the 70th anniversary of the main judicial organ of the United Nations.

In opening remarks at a solemn sitting of the Court at its headquarters in the Peace Palace in The Hague, Netherlands, to commemorate the anniversary of the ICJ – commonly referred to as the ‘World Court’ –  Ban said that while the UN has grown in size and scope, the world body is still defined by the rule of law.

The Court was established by the UN Charter in June 1945 and began its activities in April 1946. It has a twofold role: first, to settle, in accordance with international law, legal disputes submitted to it by States (its judgments have binding force and are without appeal for the parties concerned); and, second, to give advisory opinions on legal questions referred to it by duly authorized UN organs and agencies of the system.

“Respect for the rule of law – within and among nations – is one of the foundations of progress in virtually all areas of our work,” the UN chief said.

“It is an essential thread in the new 2030 Agenda for Sustainable Development,” he added.

For its part,  Ban said, the ICJ has over the years made a central contribution to the rule of law.

“It has stepped in effectively where diplomatic or political measures have failed. It has helped countries to settle their disputes by peaceful means. And it has compiled a solid record of effective and impartial judgments, thereby building global trust in the Court’s work and faith in the power of law,”  Ban said.

Indeed, the Court’s docket is fuller than ever, with Member States turning to the ICJ on some of their most complex matters, the UN chief said.

He noted that the Court is also modernizing its working methods, with judgments being delivered more swiftly, thereby leading to increased certainty for the parties involved.

“Each individual judgement of this Court benefits the States involved, resolving the specific dispute at issue and providing certainty in their mutual relations,”  Ban stressed.

“In addition, the collective jurisprudence of the Court has made an enormous contribution to public international law. This benefits the broader community of nations and, ultimately, the well-being and protection of the people we serve,” he added.

Noting the wisdom and judgement of the Court on complex legal issues, the Secretary-General also commended all States that have peacefully settled their disputes before the World Court.

In that vein, he called on all States that have not yet accepted the Court’s jurisdiction to do so.

Similarly, he also called for “steadfast compliance” with the Court’s judgements.

“The importance of resolving disputes peacefully and in accordance with international law has never been more important. Conflict is the most efficient method of derailing development known to humankind,” the Secretary-General said.

“If the path of peace is chosen, if States entrust the Judges of this august institution to determine their differences, stability is fostered and the broader international community benefits,” he emphasized, adding that the Court’s presence and work remain “as relevant as ever” for the international community.

Also speaking at the anniversary celebration on Wednesday was ICJ President Ronny Abraham, who presided over the ceremony and highlighted that in the past 70 years, the face of the world has changed substantially, which is reflected in the Court’s work.

“At 70, the International Court of Justice has reached a serene maturity,” he said.

“Conscious of the importance of the mission with which it has been entrusted by the Member States, it is ready to face the new challenges that might arise in the coming decade,” he added.

Changes in the world have, in particular, had an impact on the type of cases brought before the ICJ,  Abraham said. While it continues to hear cases on subjects over which it has been called on to exercise its jurisdiction since its inception, the Court as of late has had occasion to hear a number of disputes concerning relatively new areas, such as international environmental law. Such cases may involve the analysis of complex factual data, such as raw scientific data and reports by science experts.

The Court has also heard a growing number of cases involving alleged violations of human rights and humanitarian law, through which it has been able to develop its jurisprudence, he said. Moreover, the increase in the number of States has led to greater diversity in the geographic origin of the disputes heard by the Court. In the past few years, the Court has handed down decisions in cases involving States from South America, Africa, Asia and Europe, the ICJ President noted.

Highlighting that a significant number of the States concerned by those decisions did not exist at the time the UN was created,  Abraham said that it is therefore quite clear that the political and legal environment in which the Court operates has changed considerably since 1945.

“However, the need for a world court working for international peace and justice is as strong on Wednesday as it was when the [UN] Charter was first signed,” he said. “The Court’s judgements on the merits all represent disputes that have been settled, and situations that might otherwise have led to open conflict and that have found a peaceful outcome.”