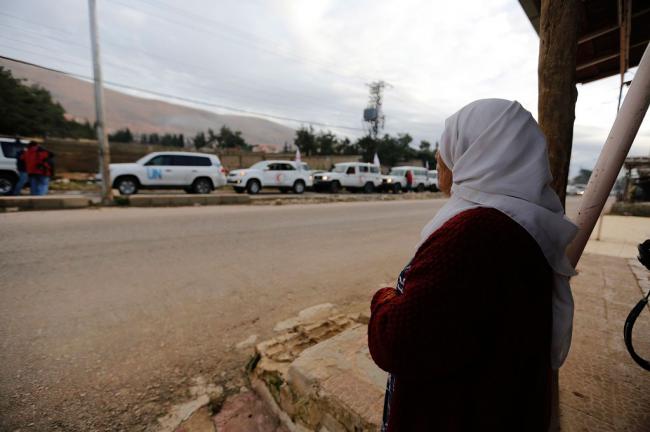 INTERVIEW: Even as some â€˜guns go silentâ€™ in Syria, access to besieged areas is limited, says UN aid official

“When guns go silent, that immediately translates into a number of positive things for the people,” UN Humanitarian Coordinator for Syria, Yacoub El Hillo, told the UN News Centre.

“They’re able to move around and go about their daily activities in a much more normal way,”  El Hillo noted, despite “a lot of abnormality” from five years of conflict.

When asked what Syria’s most pressing humanitarian needs are, he replied: “Everything.”

Some 13.5 million Syrians are in need of some form of assistance and protection, according to the UN Office for the Coordination of Humanitarian Affairs. This ranges from vaccinating children who are five-years of age and under, to providing shelter, food and water for the displaced, supporting education and health programs, and creating job opportunities.

These are the things “that keep us busy every day,”  El Hillo continued, noting that while Syria was once well on its way to becoming a high-middle-income country, “on Tuesday, 80 per cent plus of the Syrian people are poor, they live on less than $2 a day […] that’s why the needs are huge. And because of the length of this crisis, their ability to cope has also been highly eroded.”

The situation is particularly bad in besieged areas, many of which remain outside the reach of aid workers despite the 27 February cessation of hostilities. These include Madaya, Zabadani, Al Fouaa, Kifraya, in the northwest of the country, as well as areas in the west, including Deir ez-Zor, which is controlled by the Islamic State in Iraq and the Levant, known as ISIL or Da’esh.

On 10 April, the UN World Food Programme (WFP) confirmed that it was able to drop 26 pallets loaded with food in platforms attached to high altitude parachutes. The Syrian Arab Red Crescent (SARC) was able to collect at least 22 of these pallets for distribution to hungry families.

‘Ruptures’ in the cessation of hostilities

Speaking in Arabic for part of the interview,  El Hillo called on the parties – be it the Government or the opposition – to end the siege in Deir ez-Zor and other parts of Syria, which he called a violation of international humanitarian law that “must come to an end.”

The current cessation of hostilities has held for seven weeks, but there have been raptures and violations.

While typical of these types of agreements,  El Hillo said he was concerned about the frequency of the violations and the increase in such incidents.

“All must be done to ensure that the cessation of hostilities holds,” he stressed.

Funding is approaching ‘a breaking point or has already broken’

Speaking more broadly about the ongoing conflicts in the world,  El Hillo said the international community has to look at how to improve way humanitarian aid is distributed. He added that for the last several years, numerous appeals have been announced, but none end up being funded by more than 50 per cent.

Addressing root causes of conflict and finding more efficient ways of providing aid are among the aims of the World Humanitarian Summit which will be held in Istanbul, Turkey, on 23 and 24 May.

“I hope world leaders, when they come to the Summit next month, will be looking at how to actually overhaul the system of funding and financing humanitarian responses,”  El Hillo said, “but also perhaps more importantly, addressing the root causes for these human miseries.”