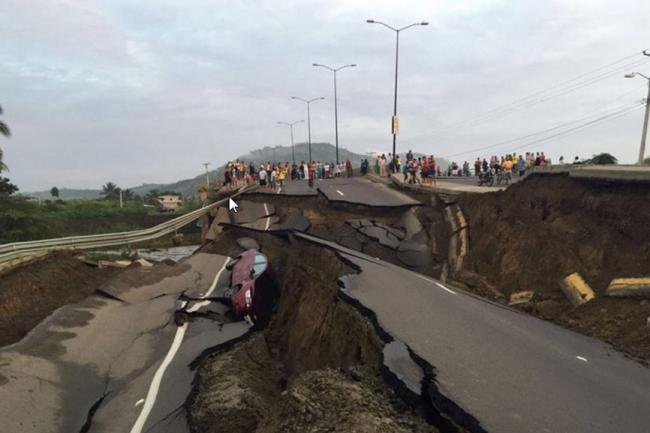 India Blooms News Service | | 20 Apr 2016, 08:30 am
#quakes in Japan and Ecuador, #UN
New York, Apr 20 (Just Earth News/IBNS): The Head of the United Nations Office for Disaster Risk Reduction (UNISDR) said on Tuesday that the deaths in Ecuador and the dozens of victims in Japan spotlighted a basic fact about earthquakes; that buildings, and not the shake itself, claim most lives.


“These earthquakes are a reminder of how important it is that we apply the highest standards possible when building in earthquake zones,” said Robert Glasser, UN Special Representative for Disaster Risk Reduction. “It is buildings and damaged infrastructure which kill people when an earthquake strikes,” he stressed.

That makes structural safety a matter of life and death in zones such as the Pacific ‘Ring of Fire,’ along which both Ecuador and Japan lie, in addition to the health risks posed by damaged water and sanitation systems and the hurdles that the impact on road networks can cause for relief operations.

Noting that earthquakes and tsunamis are relatively rare natural hazards but account for nearly 750,000 deaths over the last 20 years and significant economic losses, he said that “urbanization within highly seismic zones has accelerated significantly in recent years and it is vitally important that this is done in a way that is earthquake-resistant for future generations.”

The existence – and, crucially, the implementation – of building codes that factor in earthquake risk is a critical factor in such regions, he stressed.

To improve safety even further, it is important to bring existing structures up to scratch, for example by retrofitting historic sites. Last April’s magnitude-7.9 Nepal earthquake, which killed 8,000 people, provided a grim illustration when it toppled the landmark Dharahara tower in Kathmandu.

The death toll in Saturday’s 7.8 magnitude temblor in Ecuador, the country’s strongest in decades, has already climbed to more than 400 lives. Rescue workers are still hunting in the rubble for survivors, and more than 2,600 people are listed as injured.

The quake destroyed 805 buildings and damaged more than 600 more, including scores of schools, according to data from the UN Office for the Coordination of Humanitarian Affairs (OCHA).

The collapse of several hotels in the Pacific coast tourist region has also made international headlines.

In Japan, meanwhile, the authorities said that at least 44 people died and 1,000 were injured in the two powerful earthquakes in the southwest of the country: a magnitude 6.4 on Thursday and a magnitude 7.3 on Saturday. They are the biggest since the massive earthquake and tsunami of 2011, which left more than 19,000 people dead or missing.

Japan is a case study for strictly-enforced building codes that prioritise seismic risk reduction and are reviewed regularly in the light of developments in construction technology and early warning. As a result, the regular earthquakes that hit the country usually cause minimal damage.

Ecuador has also been bolstering its own building rules. In January 2015, its Ministry of Urban Development and Housing released new regulations, capping a process that began in 2008 and saw Ecuadorian officials and the construction sector work together with foreign experts to share lessons and best practice.

The issue was given fresh global impetus in March last year when the international community adopted the Sendai Framework for Disaster Risk Reduction, a 15-year blueprint for saving lives and livelihoods in the face of natural and man-made hazards.

Besides seeking better seismic safety, the Sendai Framework also calls on countries to avoid construction on land susceptible to liquefaction, landslides and subsidence in the event of an earthquake.

“We need to build better in the first place and not just build back better after the event,” said  Glasser.