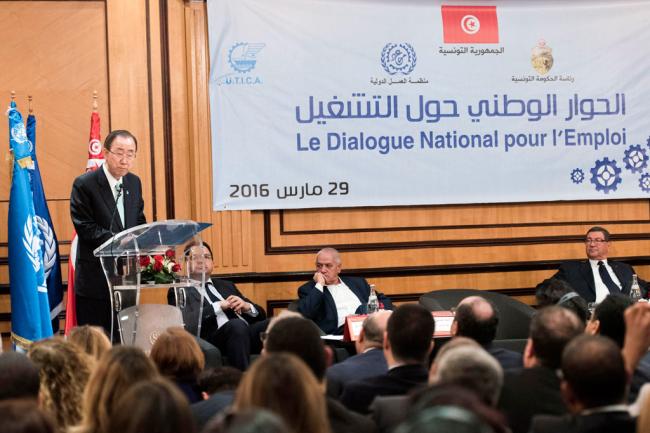 He emphasized that when young men and women are excluded from decent work, they could become susceptible to extremist discourse, and youth unemployment seriously hinders the sustainable development and growth of a country.

“There are two areas in particular where I see an opportunity for international support here in Tunisia,” he said, underscoring that at 30 per cent, the youth unemployment rate in North Africa remains the highest of all regions of the world, with 200,000 young Tunisians jobless.

First, there is a mismatch between the number of graduates and the number of suitable jobs. This will require targeted policies to help young people build careers for future growth and prosperity. Investment in new businesses is crucial, together with a reduction in cumbersome bureaucratic procedures, and an increase in women's participation in the labour force,  Ban said.

Second, active labour market programmes, targeting young graduates in particular, can be funded by public sector financing and resources from development partners. Trade unions, employers' organizations and the private sector can help by empowering young people and engaging with youth-led organizations, he added, welcoming the establishment of an employment fund to support such programmes.

For the United Nations, creating decent jobs through sustainable development is a top priority, he said, noting that Goal 8 of the 2030 Agenda for Sustainable Development, adopted last September by UN Member States, stresses the importance of employment and decent work in promoting growth and achieving other social and environmental goals.

Given that half the world's people are under 25, he appointed Ahmad Alhendawi as the first-ever UN envoy for youth to work with all UN agencies and programmes in every country and improve the coordination of policies for young people,  Ban said.

The UN now has a System-wide Action Plan on Youth, which includes a focus on employment and entrepreneurship. Last month, the UN launched an even more relevant programme: the Global Initiative for Decent Jobs for Youth, a partnership between governments, the UN system, businesses, academic institutions, youth organizations and other groups to scale up action to create new opportunities and avenues for quality employment in the global economy.

And here in Tunisia, UN agencies have set up a Youth Advisory Board to make our programmes more responsive to the needs and priorities of young people.

The Secretary-General will be in Geneva on Wednesday, 30 March, to open the high-level meeting on global responsibility sharing for Syrian refugees.