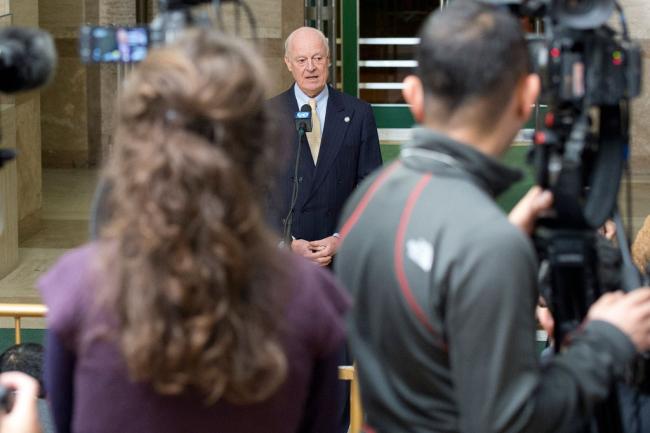 India Blooms News Service | | 16 Mar 2016, 08:06 am
#UN, # Syria, #UN-mediated talks continue
New York, Mar 16(Just Earth News/IBNS):On a day that began with a minute of silence in honour of those that have lost their lives during the five-year conflict in Syria, the United Nations envoy mediating peace talks among the Syrian parties gave a progress report, saying that opposition representatives raised the issue of detainees on Tuesday, as well as humanitarian aid to Daraya and other sites of heavy fighting.

“There has been so far, as you know, the issue of humanitarian aid and the reduction of violence, but on the detainees’ aspect we have been having nothing in terms of outcome,” UN Special Envoy for Syria, Staffan de Mistura, said in Geneva after a meeting with the High Negotiations Committee (HNC).

This was the second day of the new round of intra-Syrian talks, proximity discussions between Government and opposition representatives being mediated by . de Mistura.

He said the HNC also raised the issue of extending humanitarian aid to more areas. These could include Daraya, where control has shifted between pro and anti-Government forces over the past years.

Both issues, the envoy said, could be taken up by the humanitarian taskforce, which has been created by the International Syrian Support Group (ISSG) to oversee aid delivery since a cessation of hostilities took hold on 27 February. The ISSG, of which the UN is a member along with the Arab League, the European Union and 18 countries – including the United States and Russia – has been seeking a path forward for several months.

Reacting to the announcement by President Vladimir Putin that Russia is withdrawing the bulk of its forces from Syria, . de Mistura called it a “significant development” which “we hope will have a positive impact on the progress of the negotiations.”

In addition to exchanging ideas, . de Mistura has said that he and the HNC exchanged papers “on how to get deeper into the discussion at the next meeting on the transitional aspect of the political process.”

The UN envoy had also received a paper from the Government, with whom he met yesterday, as part of his effort to “get all the input from all the sides and then metabolize them, see where there are overlapping, contradictions or even common thinking.”

. de Mistura said that he would meet again tomorrow morning with the Government delegation. He would then leave for Bern, where he would inform the Swiss Government, which is supporting the process, about the discussions.

As an addition to his international team, the UN envoy appointed Vitaly Naumkin, a Russian expert and academic who will report to . de Mistura.

The UN official said he offered the same option to the United States, who is the other co-chair of the ISSG.

“The more they are able to contribute professionally to my own capacity of better understanding, the better it is for us,” . de Mistura said