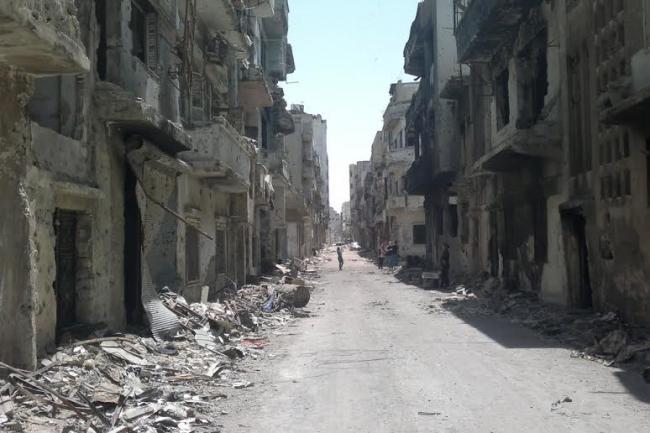 India Blooms News Service | | 12 Mar 2016, 08:38 am
# Syrian conflict, # Syria, # UN aid officials, # Syria anniversary
New York, Mar 12 (Just Earth News/IBNS):Ahead of the fifth anniversary of the Syrian conflict, senior United Nations humanitarian officials and their partners on Friday made a joint appeal for a political solution to end the fighting and pledged to keep up pressure for access to all civilians in the country.

“We use our collective voice to call on all parties, local and international, for this anniversary to be the last one and for the political talks to bring real peace and an end to the suffering in Syria,” 11 senior officials from New York, Geneva, Rome and Amman said in a joint statement.

They stressed that “no one wants to see a sixth year of conflict start on 15 March” and that on Friday’s Syria, which is almost unrecognizable in parts, will take generations to restore following the “brutal and senseless conflict.”

“Young people across Syria need to hope and believe that their future lies in their homeland,” the statement continued. “That they will have education, healthcare, homes and jobs. That life holds more than fear, violence and hunger.”

Since 2011, over a quarter of a million Syrians have been killed, according to figures cited in the statement. In addition, more half of the population has been forced to flee, including 4.8 million people who are now refugees.

For those who are displaced within the country, access to aid is one of the only lifelines, and access is often hampered. Some 4.6 million people are “barely existing” in places that are cut off, from where they cannot leave and to where aid cannot reach.

According to the statement, the UN, non-governmental organizations (NGOs) and partners have managed to reach more than six million people since early last year, but they still lack access to one-in-five besieged Syrians who urgently need help and protection.

“Until parties to the conflict fully open up safe, unimpeded access to everyone we will keep trying to reach civilians by all and any means possible, however challenging,” the officials vowed.

They also said that the UN and partners continue “to work to negotiate access with all parties,” including in hopes of delivering aid across hard-to-reach areas. Those areas include parts of northern rural Homs and in Aleppo, where the UN estimates that half a million people are caught behind active frontlines. In addition, some two million people are believed to be in areas controlled by the Islamic State of Iraq and the Levant (ISIL).

The statement also points to continued attacks on civilians and civilian locations, including schools, markets and hospitals, with medical supplies and equipment being removed at checkpoints.

“This is unacceptable,” the senior officials said, and reiterated that until these actions stop, they will continue to press all parties on their obligations and to hold them to account.

There are, however, “signs of momentum, fragile glimmers of hope” with fewer bombs, more humanitarian access and preparations for negotiators from all sides to talk, according to the statement. “As humanitarians we welcome progress where it means real change.”