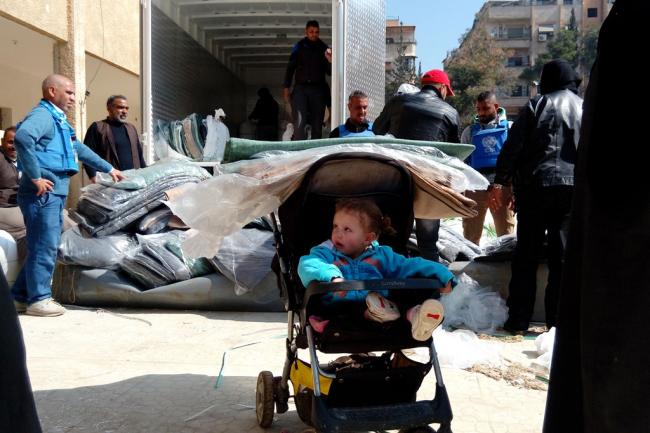 'Everyone is losing' in the Syrian conflict, UN relief chief tells Security Council

India Blooms News Service | | 25 Feb 2016, 08:53 am
#UN, # Security Council, # Syria
New York, Feb 25 (Just Earth News/IBNS) While welcoming the recent announcement of a cessation of hostilities in Syria as a â€œlong-awaited signal of hope,â€ the top United Nations humanitarian official on Wednesday echoed the calls of the world body and the international community at large for the parties involved to work towards a more durable ceasefire and facilitate conditions for increased protection and humanitarian aid.

“Enough is enough. This brutality must come to an end,” the UN Under-Secretary-General for Humanitarian Affairs and Emergency Relief Coordination, Stephen O’Brien, told the UN Security Council during a briefing on the situation in Syria at UN Headquarters in New York earlier today.

“It is hard to believe that this conflict can be resolved as long as there continues to be a complete absence of protection of civilians. The agreement on cessation of hostilities must finally and unequivocally produce what this Council’s resolutions and the basic tenets and obligations under international law could not achieve thus far: an immediate end to all targeted or indiscriminate attacks against civilians and civilian infrastructure, and enhanced protection of civilians,” he added.

O’Brien lamented that next month will mark the “grim anniversary” of the conflict that had torn Syria apart for five years.

“It has been a relentless period of violence and destruction. The Syrian people have seen their country torn apart, loved ones killed or injured, and millions of people displaced, either inside the country or in the region and beyond,” he said. “They have suffered far too much and for far too long.”

Providing the Council with an update on humanitarian access, O’Brien noted that despite intensified fighting, the UN had continued to scale up assistance to people in need, “albeit at great personal risk.”

As part of agreements facilitated through discussions in Munich earlier in February, 62 trucks in Madimayet, reaching 40,000 people, had been delivered, although the process “has not been straightforward,” O’Brien said. Another convoy to Madimayet was planned, which he stressed must happen this week.

In Kafr Batna in eastern Ghouta, 15 trucks had delivered assistance to 10,000, although that process had also encountered complications. The date of the next convoy has yet to be approved, O’Brien said, insisting on immediate approval to allow the convoys to deliver.

“Humanitarian operations cannot continue to be bogged down by unnecessary and unacceptable restrictions, obstructions and deliberate delays that are costing people their lives,” O’Brien said.

“In order for people in dire need to receive the assistance they so desperately require, the system must be urgently simplified,” he stressed.

O’Brien also said that earlier this morning, a World Food Programme (WFP) plane had dropped the first cargo of 21 tonnes of items into Deir ez-Zor. Initial reports indicated that pallets had landed in the planned target area.

In all, the UN and its partners had reached 110,000 people in besieged areas, and had approval to reach a further 230,000, including through the airdrops in Deir Ezzor. Approval was still needed for an additional 170,000 people, the UN official said.

“I cannot emphasize enough how high the stakes are at this moment in the conflict,” O’Brien said. “The Syrian people – who are rightly sceptical of the international community’s desire and ability to bring about an end to this hideous war after years of inaction – need to see an immediate difference in their daily lives on the ground because, up till this point, it is they who continue to bear the brunt of this crisis as violence has become more widespread, systematic and extreme.”

In total this past month, the UN and its partners had reached millions of people in need with assistance through all available routes, O’Brien said. Specifically, the WFP had delivered food for 3.6 million people; the UN Children’s Fund (UNICEF) had provided water, sanitation and hygiene supplies for more than 2 million people; and the World Health Organization (WHO) had delivered nearly 660,000 treatments.

Significant amounts of supplies had been delivered during February through cross-border operations authorized by the Council. During the first three weeks of the month, food assistance reached some 960,000 people, representing a 48 per cent increase compared with the same period in January, O’Brien said.

Health supplies had also been delivered for some 300,000 people in February. Large multi-truck conveys were cross the three-border crossings of Bab al-Salam, Bab al-Hawa and Ar Ramtha on a nearly daily basis.

“We will continue to stay and deliver, but we do remain concerned about the impact of fighting and insecurity on humanitarian access and operational space, in particular to eastern Aleppo city. This fragile access to people in need must be safeguarded at all cost,” he said.

“While the United Nations and its partners are ready to take advantage of any opportunity to reach people in need, granting access should never be dependent on political negotiations or ad hoc deals on the ground,” he stressed.

“Protecting civilians and facilitating humanitarian assistance are legal obligations that are incumbent on all parties to the conflict at all times and for all types of assistance. It is a fundamental and irrefutable tenet of international humanitarian law and it must be respected,” he added.

In that regard, he reiterated a call to the Government of Syria to urgently approve the more than 40 outstanding requests for inter-agency convoys to deliver assistance to hard-to-reach and besieged areas. He also called upon non-State armed groups and listed terrorist groups to fulfil their obligations.

‘There are no winners’

“In the Syrian conflict, there are no winners; everyone is losing. But the highest price is paid by Syrian men, women and children who are witnesses their country, their homes and their families being torn apart,” O’Brien said.

“This war has to end. Much as we try, the delivery of humanitarian assistance can only address the symptoms, not the root causes. The international community and the parties to the conflict must seize the momentum created around the nationwide cessation of hostilities to bring a political solution to the crisis. I cannot stress enough that we must not let this opportunity pass. We cannot take away this glimmer of hope from the people that need it the most,” he concluded.