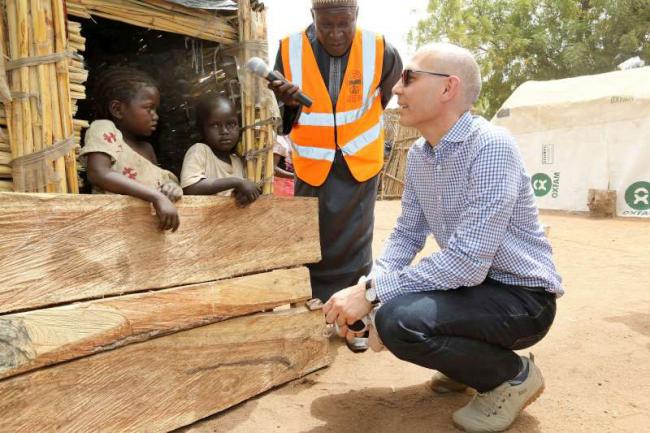 “We all need to listen to the IDPs, their aspirations and sense of dignity and safety” when organizing their returns to areas taken back by the Government but still considered risky, Volker Türk, Assistant High Commissioner for Protection at the Office of the UN High Commissioner for Refugees (UNHCR), said during a visit to Maiduguri, capital of Borno, over the weekend.

The insurgency has affected about five million people, including more than 2.2 million Nigerians who are internally displaced and almost 180,000 who have fled to neighbouring countries.

Earlier this month, suicide bombers killed more than 50 people and injured dozens in attacks on a site holding some 50,000 IDPs at Dikwa in Borno. Many of the IDPs in Borno come from towns and villages that have been practically razed over the past two years, lacking infrastructure, basic services and security.

Türk arrived in Nigeria Thursday last week to review the refugee agency’s emergency operations in the northeast. He has also met Nigeria’s Vice President Yemi Osinbajo in Abuja and Government partners to discuss the challenges and areas of cooperation.

While encouraging Government institutions and civil society organizations to lead the response to forced displacement, he said: “UNHCR, as part of the international community, will continue to support local initiatives.”

Türk also met IDPs in Borno and Yola states, listening to harrowing tales of violence and destruction and the continuing suffering and challenges facing people unable to return home.

On Same Footing with Syria

The needs are great and increasing in Borno, including Maiduguri’s 17 organized and 13 informal IDP camps hosting some 125,000 people. Alhadji Usman Didda Shua, a senior local government official, said that Borno, where social and health infrastructures are virtually non-existent, should be treated “on the same footing with Syria.”

In Borno alone, 16 out of 38 hospitals have been destroyed or looted, and 214 primary health care centres shut. Bama, the second largest city in Borno until 2014 with a population of 600,000, lies in ruins and is deserted. State authorities say it will require millions of dollars to reconstruct.

Hapsatu Amadu, a 47-year-old community leader in Malkohi on the outskirts of Yola told him they needed clothing, food and shelter. “We are exposed to the vagaries of the weather in these grass thatched huts,” she explained.

“In each crisis, there is an opportunity, which we need to seize, hopefully in the form of a new social contract,” Türk concluded.

He will next visit Cameroon to discuss the situation of Nigerian refugees there and to visit the Minawao refugee camp in the Far North Region before wrapping up his regional visit on Wednesday.