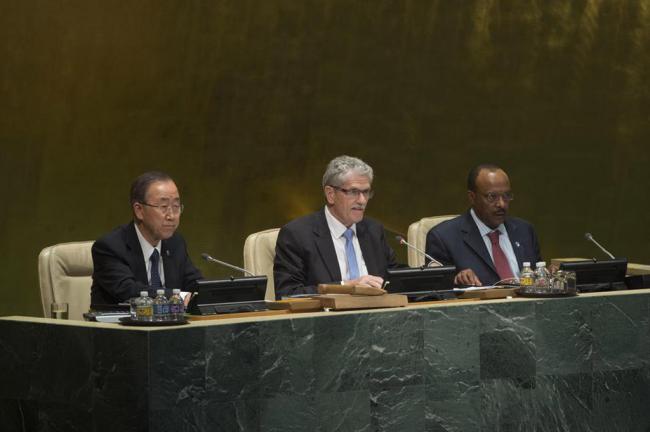 India Blooms News Service | | 16 Sep 2015, 08:48 am
#UN, # General Assembly, # President
New York, Sept 16 (IBNS): A major priority for the 70th session of the United Nations General Assembly is to ensure that all actors move swiftly to deliver on the promises being made for sustainable development, the President of the 193-member body said on Tuesday.

“In less than 10 days’ time, our leaders will gather in this hall to adopt the 2030 Agenda for Sustainable Development,” Mogens Lykketoft said as he opened the session.

The Agenda, which will be adopted during a special summit at UN Headquarters, consists of 17 Sustainable Development Goals and 169 targets that aim to be a charter for people and the planet in the twenty-first century.

They will stimulate action over the next 15 years in areas of critical importance towards building a more equitable and sustainable world for all.

“The summit, of course, marks only the beginning,” Lykketoft continued.

He said, “There is an urgent need for action right across the three pillars of the UN and ample opportunities to do so during this session. […] An ambitious and universal climate agreement is an absolute must and the first real test of the world community’s ability to deliver the necessary policy tools for sustainable development.”

Indeed, not long after the summit and the annual General Debate, leaders will come together in Paris for the UN climate change conference – or COP21.

At the same time, Lykketoft warned there will be no sustainable development without peace and security and respect for human rights.

“The UN and its Member States have a strong obligation to work together to end the catastrophic wars and conflicts – not least in and around Syria.

And we will have to act here and now to address the huge and explosive refugee crises resulting from ongoing conflicts – and to protect the human rights of all refugees.”

In addition to several high-level meetings and thematic debates he will hold over the course of his one-year tenure, the new President said he plans to continue efforts to revitalize the General Assembly’s work and to reform the Security Council.

“I will conduct all activities in as transparent, inclusive and open a manner as possible,” Lykketoft assured.

He said, “Where it is relevant I will also engage with and involve civil society representatives and others, such that a multi-stakeholder approach becomes a hallmark of my presidency.”

Also addressing the meeting, Secretary-General Ban Ki-moon recalled that this new session of the General Assembly marks the 70th anniversary of the founding of the Organization.

“The Charter’s principles have stood the test of time, and the United Nations can look back on a record of achievement,” he stated.

He said, “At the same time, we know that suffering remains widespread across the world. My thoughts today are especially with the people of Syria – those inside the country facing terrible violence, and those who have fled, desperately seeking a safe haven and a better life.”

Ban called on the 70th General Assembly session to be one of compassion, prevention and, above all, action.