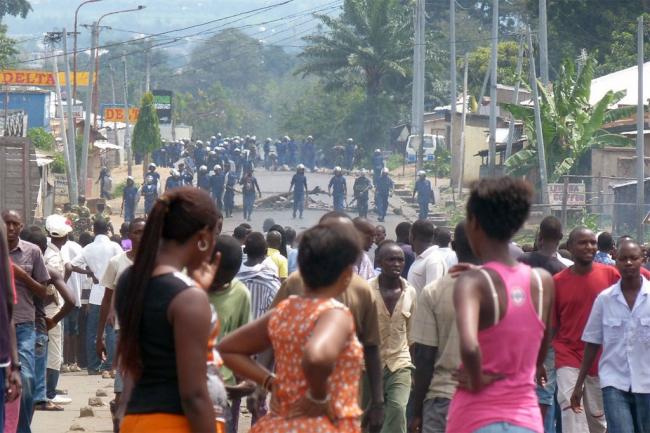 In a statement issued on Monday evening by his spokesperson, Ban wished Mbonimpa a full and speedy recovery and called for a prompt and transparent investigation to bring the perpetrators to justice.

“This incident, which comes only a day after the killing of General Adolphe Nshimirimana, is part of a growing pattern of politically-motivated violence in Burundi that must be broken before it escalates beyond control.

“The Secretary-General stresses that accountability and the resumption of a genuine and inclusive political dialogue are the best response to such attempts to destabilize Burundi.”

According to the Office of the High Commissioner for Human Rights (OHCHR), Mbonimpa was badly injured after being shot four times, including in the neck, by two people on a motorbike yesterday evening in Bujumbura while he was on his way home.

“Mr. Ndikumana was taking pictures on the crime site where General Adolphe Nshimirimana was killed on 2 August, when he was arrested and brutalized by SNR agents,” OHCHR spokesperson Cécile Pouilly told a news briefing in Geneva.

“They took him to their HQ in Bujumbura and reportedly subjected him to torture, claiming that he was a 'journalist enemy'.

Ndikumana is currently under medical care, suffering from a broken finger and psychological trauma.”

OHCHR called on the Burundian authorities to launch “prompt, transparent and thorough investigations” into these very serious incidents and ensure that those responsible are held to account, stressing that impunity for perpetrators of human rights violations must stop.

It also condemned the killing of General Nshimirimana and called for the perpetrators to be brought to justice. In addition, the Office voiced concern about the large number of arbitrary arrests over the last few months.

More than 600 people have been arrested and remain in detention without charge, some of them since April.

In a statement to the press, the Security Council also condemned the killing of General Nshimirimana and the attack on Mbonimpa, calling on all actors to remain calm and to resume an inclusive dialogue.

Nkurunziza has been in office for two terms since 2005, and a broad array of actors warned that an attempt to seek a third term was unconstitutional and contrary to the spirit of the 2000 Arusha Peace and Reconciliation Agreement for Burundi that ended a decade of civil war in the country. He was re-elected on 21 July.

The mounting violence across Burundi has also provoked a widespread humanitarian crisis as refugees have spilled across the country's borders and fanned throughout the region.