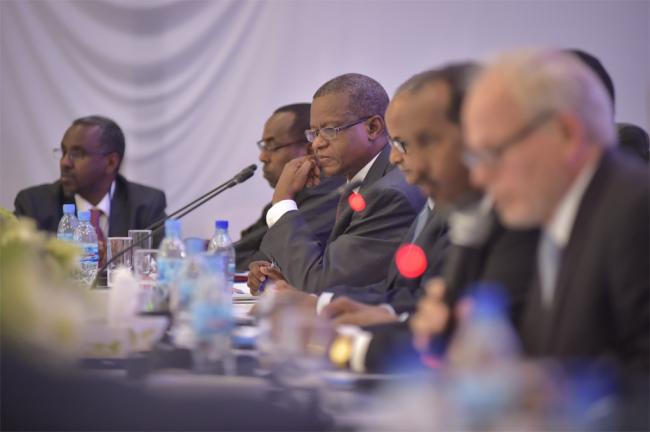 India Blooms News Service | | 04 Aug 2015, 09:03 am
#UN, # Somalia, # UNSOM
New York, Aug 4 (IBNS): The United Nations and its partners have welcomed the significant commitments made at a recent high-level forum in Somalia that will be critical to the future of the Horn of Africa nation, including the holding of inclusive elections.

“We commend the commitments made at the High-Level Partnership Forum to deliver a transparent and inclusive electoral process in 2016, to strengthen security and to accelerate the delivery of concrete results to the people of Somalia,” they said in a joint press statement issued on Monday.

The statement by the UN, the Inter-Governmental Authority on Development (IGAD), the European Union (EU), the African Union Mission in Somalia (AMISOM), and the Governments of the United States and the United Kingdom, follows the two-day forum held in the Somali capital, Mogadishu, last week.

The press statement noted that the commitment to immediately start a national consultation to agree on an electoral process for a timely transfer of public office in 2016 is a positive step.

“We also agree that the 2016 electoral process, based on inclusive consultations in the coming months, must represent an improvement on the 2012 process and be a steppingstone toward universal ‘one person, one vote’ elections,” it added.

Somalia’s international partners will follow progress closely and will make decisive efforts to help the people of the country meet these deadlines.

“Most immediately, we welcome the commitment to finalise by 15 August a detailed action plan for the national consultations on the 2016 electoral process,” said the statement, adding that such a plan should reflect the views of all stakeholders, in particular the Federal Parliament and the authorities in all the regional administrations.

“We urge all parties to engage seriously and urgently in finalizing this work and then to play a full role in the national consultative process.”

“Somalia’s international partners stated their resolve to the timely implementation of the commitments taken and agreements reached and to continue to support the goal of a united, federal and democratic Somalia, at peace with itself and the rest of the world,” said the statement.

Last week, the Security Council authorized the Member States of the African Union to maintain the deployment of AMISOM until 30 May 2016, and extended the mandate of the UN Special Assistance Mission in Somalia (UNSOM) until 30 March 2016, underlining the importance of both missions strengthening their relationship to ensure support for the country’s political process.