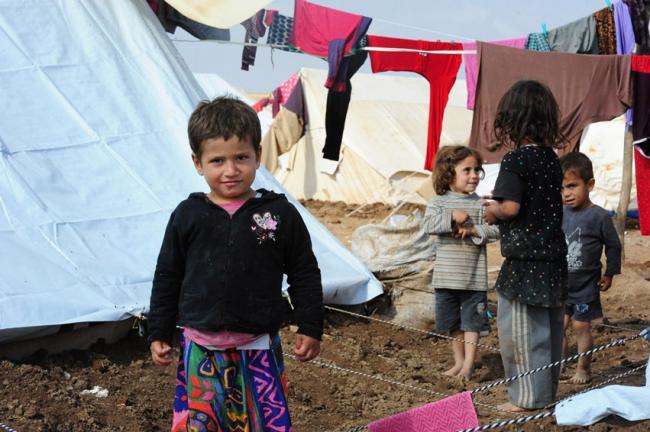 India Blooms News Service | | 29 Jul 2015, 08:44 am
#Terrorism, # ISIL, # Iraq, # UN
New York, Jul 29 (IBNS): An increasing number of people in Iraq, including families with children and the elderly, have encountered deadly ambushes as they try to escape areas controlled the Islamic State of Iraq and the Levan (ISIL) by risking their lives on a treacherous mountain journey to safety, the United Nations human rights office reported on Tuesday.

“We have received reports that suggest a violent clampdown on people who are attempting to flee ISIL-controlled areas in Iraq, particularly through the Hamrin mountain chain in northeast Iraq” and onto Tikrit, Al-Alam and Kirkuk, said spokesperson Ravina Shamdasani of the Office of the UN High Commissioner for Human Rights (OHCHR).

Shamdasani told reporters in Geneva, Switzerland, that an increasing number of people have been attempting to escape, taking a very difficult journey, and at least four families, including children and elderly people, reportedly died earlier this month after attempting the journey without a guide and with few supplies.

According to sources, the journey takes eight to 12 hours in very hot weather through uninhabited areas without signage or paved roads, she said.

“ISIL gunmen have also begun to set ambushes for people fleeing and ISIL snipers have reportedly attacked and killed those caught,” according to the OHCHR.

“In one incident, three taxi drivers were reportedly executed between 10 and 12 July in Shirqat, purportedly for assisting residents in making the passage through Hamrin.” There are also reports that many other families were abducted by ISIL en route to Tikrit and Al-Alam, it said.

“Any intentional direct attack against civilians is considered a serious violation of international humanitarian law,” the human rights spokesperson said.

She said, “All parties must ensure that civilians are protected, that they have unhindered access to medical facilities and humanitarian assistance, and that they are able to leave areas affected by violence – safely and with dignity.”

Shamdasani also said “ISIL continues to viciously target those perceived to be opposed to its ideology and rule, with despicable violence.”

On 20 July, for example, ISIL reportedly publicly killed an Imam in western Mosul following a decision by a self-appointed so-called court, allegedly for having criticised ISIL, and earlier this month four other Imams were allegedly executed for performing tarweed prayers, which are not authorized by ISIL.

Furthermore, on 10 July, ISIL reportedly killed nine people in central Mosul by running a bulldozer over them for allegedly provided information and collaborating with the Iraqi Security Forces and Peshmerga.

There have also been an increasing number of civilian casualties across the country due to car bombs and gun attacks are also occurring with frequency, according to the OHCHR.