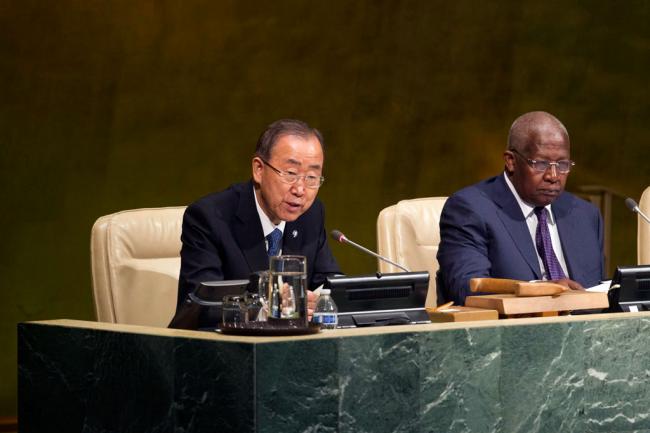 General Assembly President Sam Kutesa said today’s action “will further demonstrate our collective commitment towards eradicating poverty, achieving sustainable development and building a better future for all,” and urged UN Member States to “do whatever it will take to ensure that the Addis Ababa Action Agenda is fully implemented.”

The outcome document adopted at the Third International Conference on Financing for Development, which took place in Addis Ababa, Ethiopia earlier this month, the Action Agenda contains a series of bold measures to overhaul global finance practices and generate investments for tackling a range of economic, social and environmental challenges.

Building on the outcomes of previous development financing conferences held in Monterrey, Mexico, and in Doha, Qatar, the Action Agenda also addresses all sources of finance, and covers cooperation on a range of issues including technology, science, innovation, trade and capacity building.

In his statement to the Assembly, Ban said by endorsing the Addis Ababa Action Agenda, “we launch a new era of cooperation and global partnership.”

He hailed the development as the foundation for success at the UN summit to adopt the UN post-2015 development agenda, in New York this September, and at the Conference of Parties of the UN Framework Convention on Climate Change (UNFCCC), known informally as COP 21, in Paris in December.

“Only by staying engaged will we ensure that the commitments we endorse today will lead to tangible progress on the ground, in all countries and for all people,” the UN chief said.

Commending UN Members States for taking this critical step forward, he declared, “We are now firmly on the path to a more prosperous, just and sustainable world for this and future generations.”

Earlier this morning, Ban and Member State representatives paid tribute in a General Assembly session to the late Permanent Representative of Djibouti, Ambassador Roble Olhaye, the longest serving top diplomat at the UN, calling him a passionate champion of Africa and a great believer in the value of the continent’s partnership with the United Nations.