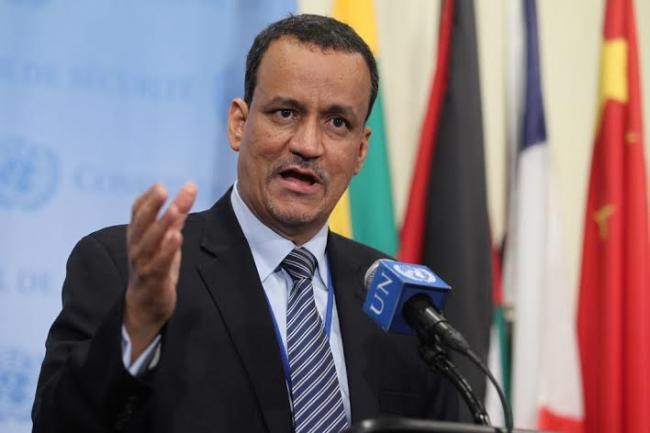 Addressing reporters earlier this afternoon at a press stakeout in New York, Ould Cheikh Ahmed applauded the efforts made by national stakeholders during the recent Geneva Consultations as they met amid an escalating conflict that has already cost thousands of lives and devastated large swathes of the country. “Despite the raging battles, the ongoing violence and the dramatic humanitarian situation, Yemenis answered the Secretary-General’s invitation and participated in the initial consultations,” he declared. “The personal presence of the Secretary-General is an indication of the primary importance attached by the UN and the international community, and in particular the Secretary-General himself to the Yemeni situation. I deeply regret the deep division between the parties and lack of compromise which prevented an agreement that was within reach.” The UN has been desperately seeking to facilitate a political solution to the Yemen crisis since fighting in the country began in March, leading to an increasingly desperate humanitarian situation on the ground. According to a recent joint survey released by the UN Food and Agriculture Organization (FAO) and the World Food Programme (WFP), six million people in Yemen are slipping towards severe hunger and now need emergency food and life-saving assistance, a sharp increase from the last quarter of 2014. In addition to the population facing a food security ‘emergency,’ over 6.5 million people are classified as facing a food insecurity security ‘crisis.’ Meanwhile, the study added, 10 out of Yemen’s 22 governorates are now classified as facing food insecurity at ‘emergency’ level. Millions more are highly vulnerable and could easily fall into emergency levels unless there is a dramatic improvement in the availability and access to food at prices that most people can afford. The humanitarian stresses brought on by the conflict, however, have only compounded the already severe human toll of the fighting. The UN Office for the Coordination of Humanitarian Affairs (OCHA), has noted that thousands of people in the country have been killed and injured by airstrikes and ground fighting in the last three months alone while over 1 million people have fled their homes. In addition, a staggering 80 per cent of the Yemeni population currently need humanitarian assistance. Finally, the dire situation has also aggravated the country’s health infrastructure as a recent World Health Organization (WHO) analysis reported over 3,000 suspected dengue cases across the country. Nevertheless, the UN-facilitated consultations – which brought together stakeholders from acros s Yemen – concluded on 19 June with the UN envoy voicing some optimism that specific goals, including the imposition of a humanitarian ceasefire, could be achieved. Reiterating that sense of hopefulness to the press this afternoon, Ould Cheikh Ahmed noted that even though a concrete agreement had not yet materialized, both sides had showed signs of “constructive engagement” regarding the possibility of reaching a humanitarian truce. “There is an emerging common ground up on which we can build to achieve an eventual cease-fire coupled with the withdrawal of combatants,” he continued. “While we pursue a sustainable long-term cessation of violence, I called on all the relevant parties to agree without delay to a humanitarian truce, especially during the holy month of Ramadan.” “We should not forget that Yemenis are living under dire conditions and it pains me to witness this ongoing suffering,” concluded the UN envoy. UN Photo/Devra Berkowitz