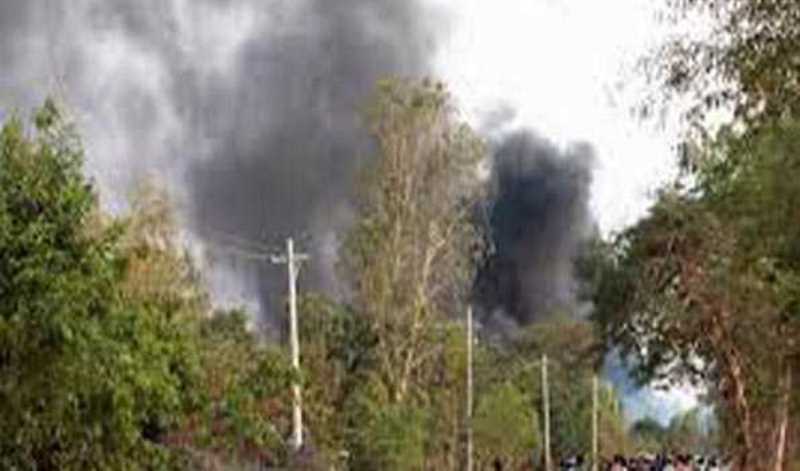 Naypyitaw/UNI: Myanmar junta personnel massacred 11 civilians in northwestern Sagaing region by reportedly burning them alive in retaliation to militia attacks, according to local residents and militia.

The incident happened on Tuesday.

Radio Free Asia quoted the villagers as saying that the victims were farm workers.

However, some media reported that most of the people killed in the incident were members of a local People's Defense Force (PDF) militia.

Meanwhile, the graphic video footage of the aftermath of the incident has gone viral on social media in Myanmar, provoking outrage.

According to a villager, the victims were local workers, who were living in tents outside Don Taw village in Sagaing’s Salingyi township, were not incolved in any recent conflivt in the area.

“Some had been hired for working in betel nut plantations, and some were workers in the palm forests outside Don Taw,” the villager said

The villager further said, a column of junta troops had fired heavy weapons into the village on Tuesday morning while they advanced from the North Yamar Bridge along the Monywa-Pathein Road.

“When we fled the village this morning, we saw smoke billowing up, and later when we went back to look we saw that the men had been burned to death.” the villager said.

Another villager was quoted as saying.“They appeared to have been tortured and then set on fire while they were still alive. They were tied with wire and not with ordinary rope. “There were 11 of them, all from the village."

This latest attack came a day after PDF fighters attacked a column of about 150 personnel near Kyae Zakya village and another PDF's attack on government forces near a hospital in Yinmabin.

“A convoy was attacked with mines near the Yinmabin 16-bed hospital, and there were some casualties and some vehicles were destroyed. And the killings today in Don Taw appear to have been carried out in revenge for those attacks.”

“But the men they killed were not PDF members. They were just ordinary villagers,” one of the PDF members said.

Protests against the junta government continues even as more than 1,300 people have died since the February 1 coup.

The military had staged a coup as it claimed that the November election won by Aung San Suu Kyi's party was rigged.