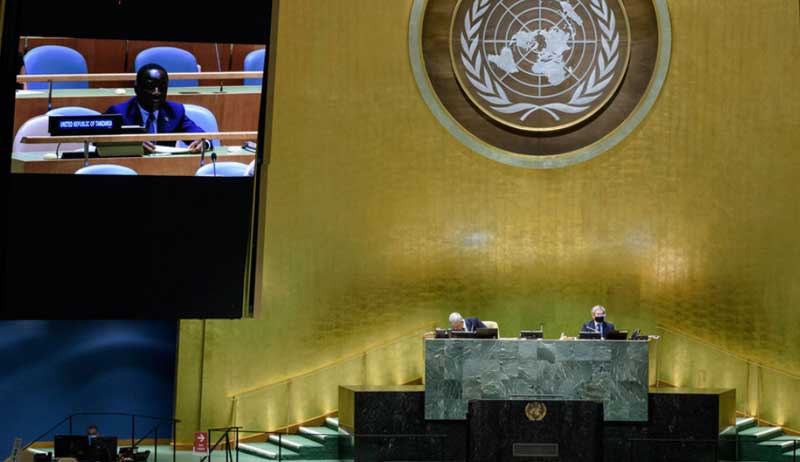 New York: The COVID-19 outbreak reminds the world that we need “to enhance solidarity within the multilateral system” to confront global challenges, the representative of Tanzania told the closing session of the UN’s annual high-level session on Tuesday.

“This Year’s General Debate hinges on multilateralism, which matches very well with our major pre-occupation to ensure that no one is left behind”, UN Ambassador Kennedy Gastorn said on behalf of Tanzanian President John Pombe Joseph Magufuli.

He stated that the UN is “the right platform to address global challenges” and called multilateralism “an important tool for collaboration among nations”.

Mr. Gastorn paid tribute to former President Benjamin William Mkapa, who died in July, and informed the delegates that the President Magufuli was unable to participate himself due to the country’s election campaign, as he vies for a second term on 28 October.

While thanking the UN system for its efforts to confront the COVID-19 pandemic, Mr. Gastorn noted that his Government’s actions to mitigate and prevent its spread have had positive results, saying that “today, all socio-economic activities have resumed to normal”.

“The pandemic has drastically claimed a lot of lives and distorted economies of individual countries and the world at large”, he stated, echoing many previous speakers.

Noting that developed and developing countries have been particularly hard hit, the Ambassador thanked development partners, including financial institutions for “debt relief, postponement of debt payments and provision of grants”.

In implementing the 2030 Agenda for Sustainable Development, he pointed out that Tanzania has accomplished “a number of achievements”, including the milestone of having been upgraded from least-developed to lower-middle income status by the World Bank in July.

Building a trade economy in Tanzania, has gone “hand-in-hand” with the construction of a hydro-electric power plant in the Rufiji river to boost energy supply in industries, according to the Ambassador.

“Our blueprint for industrial economy and human development seeks to address the infrastructure and regulatory hurdles and thereby create a smart, functional and fair investment and business regulatory regime”, he explained.

Tanzania stands with the UN

On the international front, he stressed that the UN’s credibility rests on a “well-represented and responsive Security Council” and closed by pledging Tanzania’s continued support to ensure success in its Global agenda.

“Tanzania reiterates its commitment to multilateralism and calls upon all Member States to embrace it for a just and better world”, Ambassador Gastorn concluded.