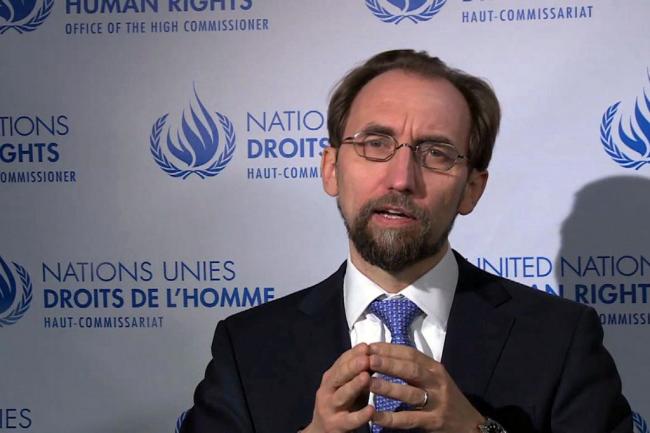 Myanmar needs to get back on track: UN rights chief

India Blooms News Service | | 26 Feb 2015, 09:37 am
#UN rights chief says Myanmar needs to be back on track
New York, Feb 26 (IBNS): United Nations High Commissioner for Human Rights (OHCHR), Zeid Ra'ad Al Hussein, on Wednesday warned that Myanmar â€œseems headed in the wrong direction and needs urgently to get back on trackâ€ in a crucial year for the country's democratic transition and long-term reconciliation.

“The international community has seen the transition in Myanmar as a story of promise and hope,” the High Commissioner said in a statement.

He also said, “But recent developments relating to the human rights of minorities, the freedom of expression and the right to peaceful protest are calling into question the direction of that reform, and even threatening to set it back.”

Zeid cited a number of recent cases in which the new space for freedom of expression and peaceful protest has been curtailed by regressive application of the law.

“In the latest in a long line of similar cases, last week 14 members of the Michaungkan community were jailed for peacefully protesting the alleged confiscation of their land by the military. Last year, we saw the jailing of 10 journalists under outdated defamation, trespassing and national security laws. And U Htin Lin Oo remains in detention for speaking out against the use of Buddhism as a tool for extremism,” Zeid said.

“Myanmar had promised to end the era of political prisoners, but now seems intent on creating a new generation by jailing people who seek to enjoy the democratic freedoms they have been promised,” the High Commissioner continued, stressing that ensuring democratic space will be critically important for the upcoming constitutional referendum and elections.

On 11 February, Myanmar's President issued a notification announcing the expiry by the end of March of temporary 'white cards', held mainly by ethnic minorities who do not have citizenship under the discriminatory 1982 Citizenship Law.

The decision appears designed to prevent 'white card' holders, the majority believed to be members of Myanmar's stateless Rohingya Muslim minority – from being eligible to vote in the upcoming constitutional referendum and possibly in the General Election later this year.

On 16 February, the Constitutional Tribunal ruled that it would be unconstitutional for 'white card' holders to vote in any upcoming referendum.

The Rohingyas, who number about one million, have lived in Myanmar for generations, but they are denied equal access to citizenship, and many have been victims of violent attacks. Notwithstanding that the Government has made some efforts to improve services, around 140,000 people continue to reside in overcrowded camps, the vast majority of whom are Rohingya, with severe and discriminatory restrictions placed on their freedom of movement.

Noting the Government's official resistance to the use of the term “Rohingya”, Zeid warned the denial of a group's right to self-identification “should sound a clear warning bell” to the international community.

“During an election year, it will be tempting for some politicians to fan the flames of prejudice for electoral gain,” the High Commissioner said.

He added, “But at a time when religious extremism is creating havoc in many parts of the world, the terrible consequences of appealing to or appeasing such sentiments should be all too clear. A new democratic Myanmar should be built on the strength of its diversity.”

High Commissioner Zeid also expressed particular concern about four new laws, currently before Parliament, that are discriminatory against women and religious minorities and breach international standards on freedom of religion.

The package of laws would place restrictions upon people who wish to change their religion, control the marriage of Buddhist women to non-Buddhist men, and allow the Government to regulate birth spacing and family planning in certain areas through the designation of special zones for “healthcare”.

The situation in the Kokang self-administered zone in northeastern Shan State, which is fast deteriorating following the escalation of violence between the Myanmar Army, the Myanmar National Democratic Alliance Army and other armed groups, is also cause for alarm, the High Commissioner warned. He added that the two attacks against Red Cross convoys in the space of a week were very disturbing.

Reports suggest tens of thousands have been displaced by the current fighting. On 18 February, a State of Emergency was declared for 90 days in the Kokang self-administered zone, providing wide-ranging executive and judicial powers to the military.

“It will be tragic for Myanmar's peace process if this violence is allowed to spiral,” Zeid said.

He also said, “All parties must step back from the brink and ensure full respect for human rights and protection of the civilian population.”