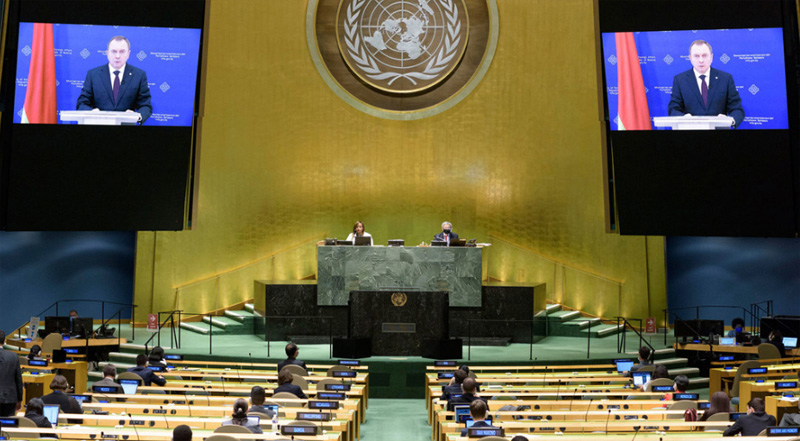 New York: Political and economic threats against Belarus “must end” the Foreign Minister Vladimir Makei told the high-level segment of the UN General Assembly on Saturday, accusing Western nations of trying to sow “chaos and anarchy” in the country.

In a pre-recorded video address to the Assembly’s annual debate, being held virtually this year due to the coronavirus pandemic, Mr. Makei regretted what he described as cynical attention paid by some to recent events in his country.

While acknowledging that the situation had become complex, he said this was “by dint of circumstances imposed upon us, primarily from elsewhere.”

He rejected “statements brimming with cynicism” from several Western countries under the pretext of being concerned over Belarusian sovereignty and prosperity, but which “are actually nothing more than attempts to bring chaos and anarchy to our country.”

And the Foreign Minister deplored the attempts of a certain number of States “to abuse the platform” of the UN and the Security Council, to defend their “narrow political ambitions”.

Mr. Makeï recalled that last August, following the presidential election, the people of Belarus made the “clear” choice for a “stable and prosperous” State, focused on peace, good neighborhoods and sustainable development.

“However, rather than respecting this choice, we are seeing attempts to destabilize the situation in the country,” he stated, explaining that following unsuccessful attempts to “impose ‘colour revolutions’ on us, we are now experiencing external interference aiming to undermine the very foundation of our State.”

He warned that such interference and denounced the imposition of sanctions or other coercive measures that would only have “the opposite effects and will be harmful to absolutely everyone.”

The future of the Belarus will be decided by its people, insisted Mr. Makei, “not on the barricades”, but through “civilized dialogue, including the process of constitutional reform”.

He firmly rejected unilateral coercive measures in international relations and cited the commercial, financial and economic blockade imposed on Cuba by the United States as a glaring example of the “harmful” effects of such measures.

For the Foreign Minister, this “means of asphyxiation” to put pressure in an arbitrary manner on sovereign States are unacceptable and must cease immediately.

Unfortunately, the pandemic has clearly shown that at the height of the global health crisis, the international community “that we talk about so much” was essentially unable to meet the hopes placed upon it.

“Clearly, the thinking was that this was a challenge best addressed individually,” he said, and practically all countries “battened down the hatches, closed their boarders and cut off contact to the outside world.”

Sadly, some chose to accuse others of acting wrongly in the fight against COVID-19, and thus, “the international community did not draw up a common approach, so the real problem lies not so much with the pandemic as elsewhere,” he asserted.

And while much remains to be seen and learned from this crisis, it is quite certain that the coronavirus epidemic on one hand has shed light on the acute need for a strong State, and on the other, it has clearly shown how inter-connected the world really is.

“Indeed, no country alone can make real progress in solving problems that are global in scale. We need to learn to work together.”

To advance sustainable development and realize the 2030 Agenda, the Foreign Minister underscored the importance of partnership, saying that Belarus is involving domestic and international partners in supporting a green economy.

This unusual year has forced humanity to rethink its way of life, and going forward, nations must aim at building a better world, according to Mr. Makei.

As such, the UN and the Security Council must move with the times, ending wars  and helping nations to achieve the Sustainable Development Goals (SDGs), he said, pledging his country’s steadfast support.