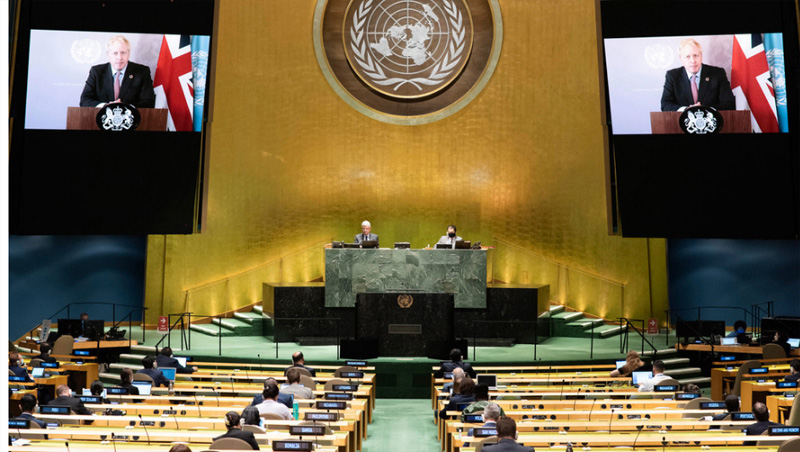 Repair ugly rifts and unite against common foe, COVID-19, ‘or everyone will lose’, warns UK’s Johnson

“And yet the crisis has also been an extraordinary force for division”, Boris Johnson said in a pre-recorded video address to the Assembly’s annual debate, being held virtually this year due to the coronavirus pandemic.

Although the world is “up against the same enemy”, he pointed out that borders have been springing up “between friends and allies” and global supply chains disrupted with “cheque book wars on airport tarmacs” as nation vie for PPE.

“We simply can’t continue in this way”, he stressed, urging the delegates to “unite…against our common foe” lest everyone lose.

Amidst colossal economic suffering and nearly a million people dead the Prime Minister said “there is a moral imperative for humanity” to reach a joint understanding of how the pandemic began and how was able to spread to “collectively do our best to prevent a recurrence”.

The UK Prime Minister called the World Health Organization (WHO) “the one body that marshals humanity against the legions of disease” and announced a 30 per cent increase in funding over the next four years, amounting to £340 million.

As we strive for a vaccine, we must never cut corners -- British Prime Minister

Calling himself a staunch supporter of science, Mr. Johnson said, “epidemiologists at Oxford University identified the first treatment for COVID-19” and shared with the world dexamethasone, a cheap medicine that reduces the risk of death by over a third for patients on ventilators, “so that as many as 1.4 million lives could be saved in the next six months”.

And as the biggest donor to Gavi, the global vaccine alliance, he explained that in June, the UK helped to raise almost $9 billion to immunize 300 million children against killer diseases and noted that there are 100 potential vaccines currently trying to clear the hurdles of safety and efficacy.

“But even as we strive for a vaccine, we must never cut corners, slim down the trials or sacrifice safety to speed,” Johnson asserted.

The Prime Minister vowed to use the UK’s presidency of the G20 richest nations to “create a new global approach to health security” based on a five-point plan to “protect humanity against another pandemic”. The first aim is to “stop a new disease before it starts”, he said, including by forging a global network of zoonotic research hubs, to spot animal pathogens that may cross the species barrier and infect humans.

Secondly is to develop the manufacturing capacity for treatments and vaccines on hand to stop organisms before they can attack or at least be able to quickly diagnose.

The next objectives are to design a global pandemic early-warning system, based on data collection and analyses, and then to have emergency response protocols should another crisis arise.

Finally, he urged every country to lift export controls wherever possible and cancel tariffs on gloves, protective equipment, thermometers and other critical products.