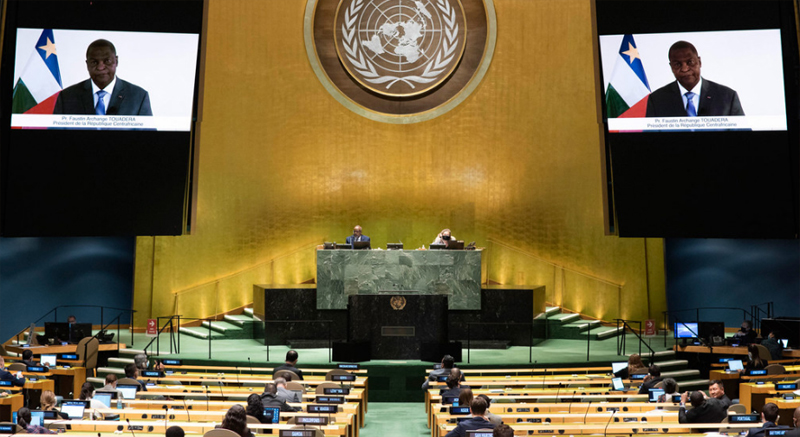 New York: Central African Republic, like nearly every nation on the planet, has not been spared by the COVID-19 pandemic, with indictors predicting a contraction by up to 1.2 of the country’s economic growth, President Faustin Archange Touadera said on Thursday, calling on world leaders to unite against the virus.

In an address to the UN General Assembly’s, annual debate, via a pre-recorded video, President Touadera asked the international community to find common solutions to eradicate the coronavirus.

Humankind is confronted by various challenges, he said, and as such, the theme of the 75th General Assembly session reaffirms a “collective commitment” to multilateralism, which he declared is the best instrument to combat challenges that respect no boundaries.

At this seventy‑fifth anniversary, it is essential to keep in mind the goals and principles that have guided the Organization as outlined in its Charter, said President Touadera.

In his address, the leader of the Central African Republic underscored that the United Nations remains the ideal framework and forum for multilateralism.

No human creation is perfect, he said, adding that it is a good idea to take stock of some of the weaknesses of the past 75 years and to try and find lasting solutions.

He joined other Member States and the African Union in supporting Security Council reform, reasoning “it is necessary to transcend narrow interests and it is also important for Africa to be better represented in the various organs of the Organization.”

Through multilateralism, it can be ensured that there is a more secure and stable future.  Humankind merely aspires to peace, justice and sustainable development.

On the situation in his country, President Touadera that a political agreement on peace and reconciliation was signed between the Government and 14 armed groups in early February last year.

Since then, his Government, as well as the guarantors and facilitators of the agreement, have spared no effort to uphold it.

However, despite the Government’s good faith, massive violations of international humanitarian law and human rights continue to be perpetrated against civilians by armed groups that are signatories to the agreement.

Despite progress achieved in security sector reform in his country, many challenges remain, he said, underscoring that lasting support by the international community is essential to implement the peace and reconciliation agreement.

Electoral authorities are also working to ensure the elections are held along the established timetable, in compliance with the Constitution.

The Government, with the support of the UN Multidimensional Integrated Stabilization Mission in the Central African Republic (MINUSCA), continues to make progress, including with the redeployment of defence and security forces, added the President, urging also the “full lifting” of the arms embargo against his country.