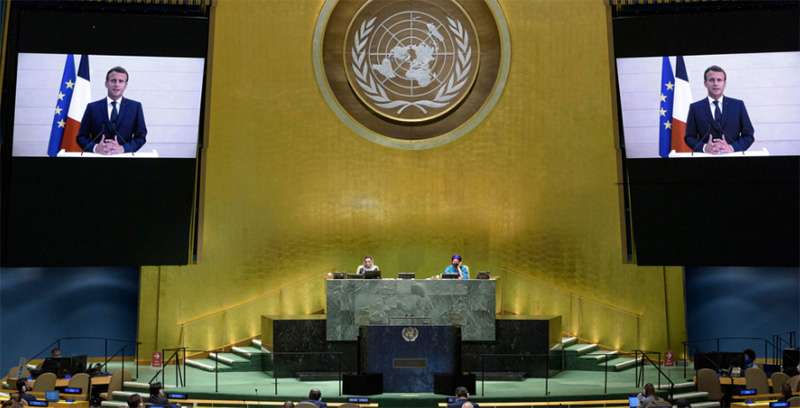 New York: The coronavirus pandemic requires cooperation between nations and should serve as an “electric shock” to wake up the United Nations, French President Emmanuel Macron stressed on Tuesday during the General Assembly’s annual high-level debate, held virtually this year.

“This crisis, undoubtedly more than any other, requires cooperation, requires the invention of new international solutions,” Macron said in his wide-ranging video address.

He noted that “the international organizations that we so badly need, like the World Health Organization, have been accused by some of complacency, and instrumentalized by others” and that scientists and journalists, “so essential for understanding and acting effectively in the face of the crisis, have been called into question by the propaganda of the States, as by the epidemic of disinformation”.

President Macron also considered that the UN itself “runs the risk of powerlessness”, with the Security Council, for example, having hardly managed to meet at the height of the coronavirus pandemic because two of its permanent members “preferred to display their rivalry.”

“All the fractures that existed before the pandemic, the hegemonic shock of the powers, the questioning of multilateralism or its instrumentalization, the trampling of international law has only accelerated and deepened at the same time. in favor of the global destabilization created by the pandemic,” he explained.

In this context, “we no longer have the right to close our eyes. We no longer have the opportunity, the luxury, if I may say so, to procrastinate. This pandemic must be for our organization an electric shock and the moment of a saving awakening”, he affirmed.

The world as it is today “cannot be reduced to the rivalry between China and the United States, whatever the global weight of these two great Powers, whatever also the 'history that binds us together,” he said.

“The crisis, the collapse of our cooperation frameworks, the weaknesses that I have just mentioned require us to rebuild a new order and force Europe to take its full share of responsibility,” he stressed.

Mr. Macron underscored that “in the weeks and months to come, fundamental choices will have to be made. There will surely be a cure for the pandemic one day. But there will be no miracle cure for the destruction of the contemporary order.”

The French President detailed the five priorities on which France wishes to build the foundations of a new contemporary consensus.

The first objective is the fight against the proliferation of weapons of mass destruction and against terrorism. The second priority, “is the demanding construction of peace and stability while respecting the equal sovereignty of peoples”. The third priority is the protection of “common goods” (health, climate, biodiversity, digital space, and education).

The fourth priority is the construction of a new era of globalization, “because we can see it clearly, the risk is to respond to this crisis of globalization by a nationalist withdrawal, by the violence of populism, rather extremes, and by the return of powers. “We must together lay the foundations for a fairer, more balanced, more equitable, more sustainable globalization,” declared the French President.

Finally, the fifth objective is respect for international humanitarian law and the fundamental rights of everyone. “For me, this goal is essential to the very survival of our organization. Indeed, in this area we are witnessing a series of setbacks and very often too much silence,” stressed Mr. Macron.

He said that the reconstruction of the foundations of the international order requires the establishment of functional international cooperation based on clear rules, defined and respected by all.

“Multilateralism is not just an act of faith, it is an operational necessity,” he added. “However, we can no longer be satisfied with a multilateralism of words which only allows fundamentally to accept the greatest common denominator, a way of hiding deep differences under a facade consensus.’