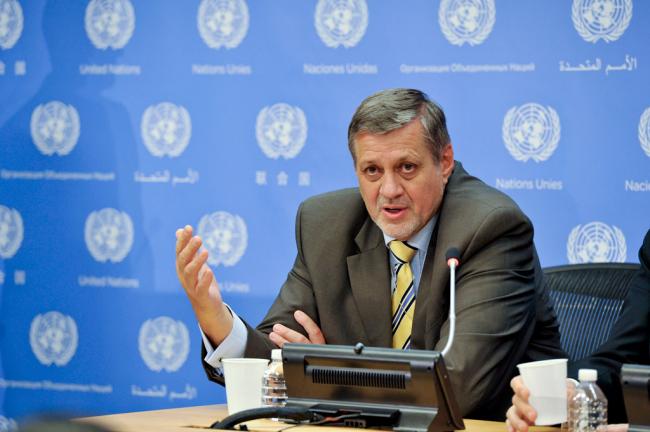 The Secretary-General’s spokesperson said Ban was “grateful” for Mladenov’s “dedication and leadership of UNAMI” and thanked him for serving in “one of the most challenging United Nations duty stations and at a time of important political and security developments in the country.”

Mladenov, in turn, has been tapped as the UN’s new Special Coordinator for the Middle East Peace Process, a role in which he will, among other things, oversee the ongoing UN-backed reconstruction efforts in Gaza where thousands of people are seeking access to building materials for urgent repairs to their homes following last summer’s conflict in the war-ravaged enclave.

According to the UN spokesperson, Kubiš will bring to his new role in Iraq several years of experience in diplomacy, foreign security policy, and international economic relations with past experiences as the Executive Secretary of the UN Economic Commission for Europe and Minister for Foreign Affairs of Slovakia.

Amid ongoing fighting between Iraqi Government forces and the Islamic State in Iraq and the Levant (ISIL) and continuing sectarian tensions across society, the Middle Eastern country is facing a period of immense peace and security challenges.

The country is also being tested by fiscal constraints and UNAMI is currently working actively with the authorities to set up a Recovery and Reconstruction fund, while the challenge posed by supporting persons displaced by conflict also remains huge.

Overall, 5.2 million people need humanitarian assistance, of whom 2.25 million are displaced and 235,000 are refugees from Syria, with the population of the Kurdistan Region having increased by 30 per cent because of the influx.