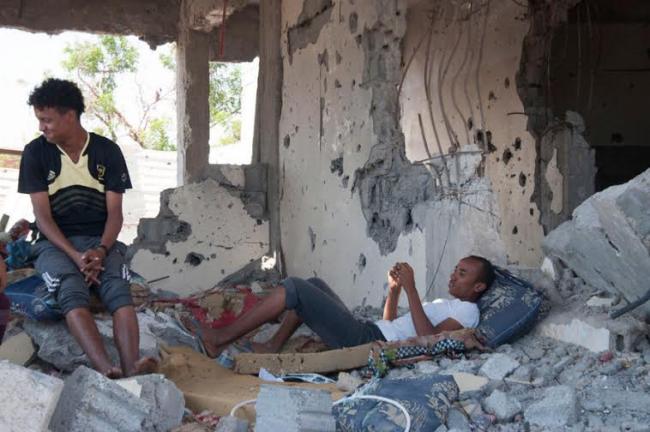 India Blooms News Service | | 13 Feb 2015, 05:20 pm
#Yemen
New York, Feb 13 (IBNS) Amid a dangerous political and humanitarian crisis and a seething secessionist movement, Yemen sits on the brink of collapse, United Nations Secretary-General Ban Ki-moon warned the Security Council today, reminding the international community of its "solemn obligation" under the UN Charter to help the country prevent an escalation of the conflict and re-launch its political process.

“We have all been following recent developments in Yemen with the deepest concern,” said Ban, as he briefed the 15-member Council alongside the UN Special Advisor, Jamal Benomar. “Let me be clear: Yemen is collapsing before our eyes. We cannot stand by and watch,” the UN chief warned.

Despite the formation of a new Government in November 2014 aimed at ending a period of political turbulence and bringing about a full transition towards democracy, Yemen continues to be plagued by violence and mass political demonstrations.

Just two weeks ago, Ban voiced serious concern about developments following the abduction by the opposition group Ansarallah of President Abd-Rabbu Mansour Hadi's chief of staff and the resignation of the President and Prime Minister amid a takeover of the capital, Sana'a by secessionist Houthi militants. This followed a steady deterioration since the beginning of the year as Government forces clashed with militant groups throughout the capital.

At the same time, the Secretary-General said today, “widespread and lethal” attacks by Al-Qaeda in the Arabian Peninsula (AQAP) and escalating hostilities between AQAP and the Houthis have pushed the country to the edge of civil war. These developments, coupled with a burgeoning humanitarian crisis which has enveloped an “astounding” 61 per cent of the population, now threaten regional and international peace and security, Ban added.

“Given these troubling circumstances, we all have a solemn obligation to live up to our commitments under the UN Charter,” he continued. “We must do everything possible to help Yemen step back from the brink and get the political process back on track.”

The Secretary-General pointed out that Yemen's transition had, in fact, an agreed roadmap. Nonetheless, he also appealed to all members of the Council to work closely with regional and international partners to help de-escalate tensions in the Gulf country and “pave the way for a peaceful way forward through political negotiations.”

In addition, he said members should urgently boost funding for the 2015 Humanitarian Response Plan – a critical element towards “preventing an escalation of the conflict and creating the basis for reverting to peaceful political transition, which I firmly believe is the way forward.”

UN Special Adviser on Yemen, Jamal Benomar, who has continued to facilitate negotiations with all national stakeholders despite very difficult operational circumstances, also cautioned the Council that Yemen stood at a “crossroad.”

The transition, he said, had managed to make “good progress” despite the “many minefields” encountered along the way. Now, however, it remained in disarray amid a series of “dramatic events” including unilateral actions by Ansarallah which had created a “strong backlash domestically and internationally.”

The effects of this continuing instability have transformed Yemen into a patchwork of simmering feuds – an explosive mix of unresolved grievances which risk inundating the entire peace-making process. In the oil-rich province of Mareb, for instance, Benomar noted that the situation had become “very tense” with many locals fearing an imminent confrontation between Houthis and tribesmen. Meanwhile, in the South, the situation remains volatile with Southerners, long marginalized and excluded from Yemeni political life, now demanding full separation.

The Special Adviser also reiterated Ban's concerns about the resurgence of AQAP and Yemen's brimming financial insecurity which, he cautioned, would only further exacerbate the country's deep humanitarian crisis.

“The political, humanitarian and security environments pose serious challenges for UN operations. Nevertheless, the UN will not leave,” he continued. “Despite all the setbacks this dream is still alive. The Yemenis can still make it. The Security Council and the international community have a responsibility to support them in these difficult times.”