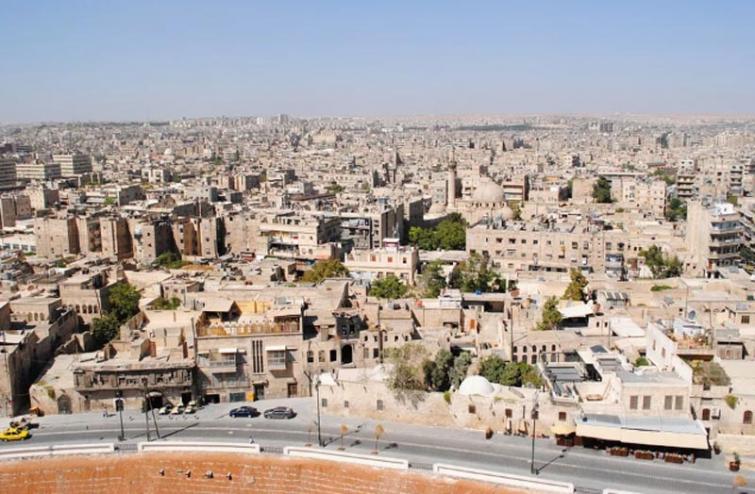 Damascus/Xinhua/UNI: The Syrian government forces on Monday said that Syria's northern city Aleppo has been finally made safe from shelling after a wide-scale military operation, saying that dozens of villages and towns returned under government control as a result of the current military operation..

After its liberation in 2016, the provincial capital of Aleppo remained the centre of mortar shelling by the rebels in the western and northwestern countryside of Aleppo, which claimed the lives of many people.

The army captured key areas in the countryside of Idlib but most notably managed to secure much of the northwestern and western countryside of Aleppo, thus securing the vicinity of the provincial capital of Aleppo, and also opening the Damascus-Aleppo highway that has been cut off by the rebels in Idlib and Aleppo since 2012.

A military officer in the Lairamoun area in western Aleppo said the aim of the current military operation is to secure Aleppo from shelling and to open the road connecting areas in the northwestern countryside of Aleppo, namely the towns of Nubbul and Zahra, with Aleppo city.

"The road has been secured and it's now safe from the provincial capital of Aleppo toward the towns of Nubbul and Zahra in northwestern Aleppo," he said.

Addressing the military operation in Aleppo, Syrian President Bashar al-Assad said Monday that the recent victory of the Syrian army in Aleppo province is a prelude to the major defeat of the rebels elsewhere.

In a televised speech following the major victory of the Syrian army in the western and northwestern countryside of Aleppo, Assad said it does not mean the end of war, nor the elimination of terrorism.

"But this victory is a prelude to the complete defeat (of the rebels and their backers) sooner or later," Assad said in his speech aired on the national TV.
Assad, meanwhile, said the battle for retaking all areas in Aleppo and Idlib countryside in northern Syria is ongoing and so is the battle to "liberate all Syrian soil, eliminate terrorism, and achieve stability."

Also, by securing the western countryside of Aleppo, the International Airport of Aleppo will resume working on Wednesday for the first time since 2012.

Syria's Transportation Ministry announced on Monday that the International Airport of Aleppo will return to service on Feb 19.

In a statement, the ministry said that the first flight from Damascus to Aleppo will take off on Wednesday.

Minister of Transportation Ali Hammoud said the airport is ready now and flights to Cairo and Damascus are scheduled for the coming few days.