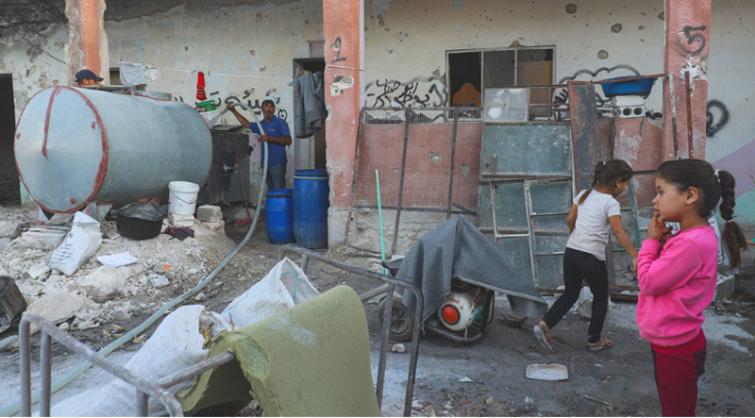 The military helicopters dropped the leaflets on areas in the western countryside of Aleppo and urged the civilians in both Aleppo and Idlib to leave rebel-held areas through three humanitarian corridors opened by the Russian forces, according to the Syrian Observatory for Human Rights.

"Our families in Idlib and the western countryside of Aleppo, the Syrian army is keen for your safety. Protect you and preserve your lives through leaving the armed men areas and heading toward the crossings opened by the Russians," one of the leaflets read.

The corridors are prepared for the civilians who are willing to leave rebel-held areas to government-controlled ones in Idlib, which is part of implementing a truce in the part of the country, a military source told Xinhua on Saturday.

The corridors are opened in the city of Habit in the south of Idlib, Abu al-Duhur in the east of Idlib and al-Hadir in the southern countryside of Aleppo.

The move comes as Russia and Turkey mediated a new cease-fire in Idlib last week, following several failed attempts to establish a cessation of hostilities.

The cease-fire went into force on Saturday, according to the Observatory, which noted that cautious calm has prevailed the cease-fire area in Idlib over the past 12 hours save for some shelling by the government forces.

The Syrian army has made notable progress in recent weeks in the battles against the rebels in Idlib, capturing several areas in the quest to liberate the road linking Hama Province with Aleppo in the north.

Syrian President Bashar al-Assad said recently that the battle against terrorism in Idlib is a priority for the Syrian government.

Idlib has emerged as the main destination of the rebel groups, which have evacuated several positions across Syria after surrendering to the Syrian army.

Certain parts of Idlib are covered by a de-escalation zone deal brokered by Russia and Turkey which backs the rebels.

However, such deals exclude the ultra-radical rebels who are affiliated with the al-Qaida and designated as terrorists by the United Nations.