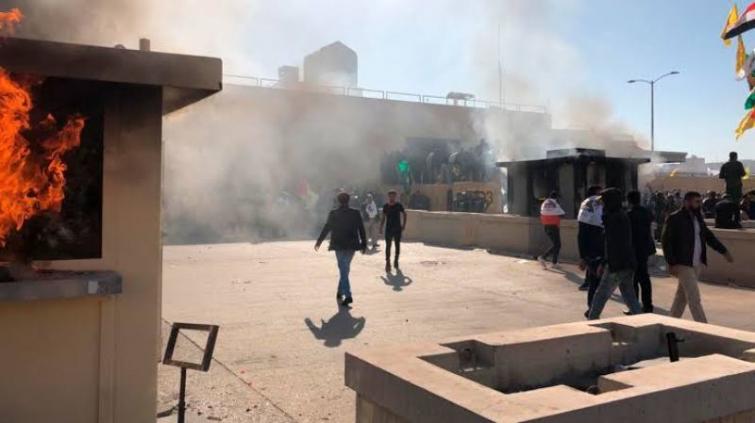 US Embassy's security guards use tear gas against protesters in Baghdad: Reports

Beirut/Sputnik: The US embassy security personnel have deployed tear gas to disperse demonstrators off its territory in Baghdad, Lebanese Al Mayadeen broadcaster reported on Wednesday.

Mass rallies at the territory of the US diplomatic mission resumed earlier in the day. According to media reports, several protesters were injured.

On Tuesday, angered Iraqis stormed the US embassy in Baghdad and torched its outer fence in protest against recent US airstrikes that targeted the Kata’ib Hezbollah Shiite militia in Iraq and Syria.

The Pentagon said on Sunday it carried out "defensive strikes" against five Kata'ib Hezbollah facilities in Iraq and Syria in retaliation for the Iranian-backed group's attack on a US base near the northern Iraqi city of Kirkuk that left one US defense contractor dead and four US soldiers wounded on Friday.

Iran's Foreign Ministry on Tuesday dismissed "empty" accusations coming out of Washington about Iran allegedly orchestrating attacks on the US embassy in Iraq.

The ministry also called on Washington to reject its "destructive policies" in the Middle East.