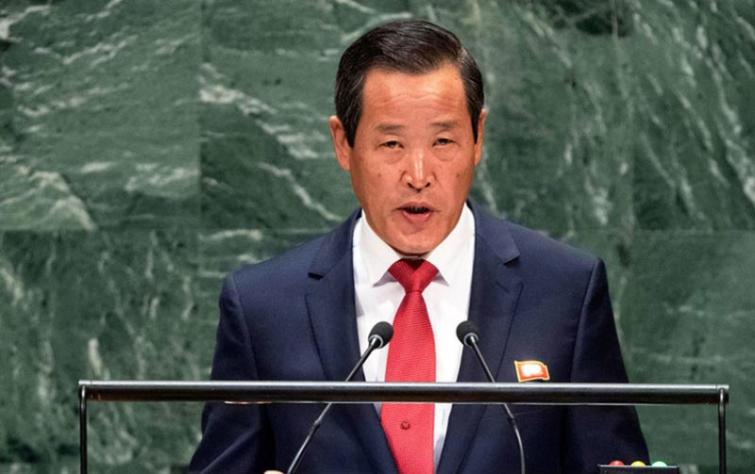 New York: Lack of progress in achieving peace on the Korean Peninsula is “entirely attributable” to the United States, a senior official from the Democratic People’s Republic of Korea (DPRK) told the UN General Assembly on Monday.

Kim Song, head of the country’s delegation, observed that more than a year has passed since DPRK leader Kim Jong Un and US President Donald Trump issued a joint statement following a historic summit in Singapore in June 2018.

It included security guarantees from Washington while the DPRK, also referred to as North Korea, committed to complete denuclearization of the Korean Peninsula.

“However, the relations between the DPRK and the US have made little progress so far and the situation of the Korean peninsula has not come out of the vicious cycle of increased tension, which is entirely attributable to the political and military provocations perpetrated by the US resorting to the anachronistic hostile policy against the DPRK,” Mr. Song said.

“It depends on the US whether the DPRK-US negotiations will become a window of opportunity or an occasion that will hasten the crisis.”

Last year also saw strides in the relationship between the DPRK and its neighbour to the south, the Republic of Korea.

Pyongyang and Seoul held three summits in 2018 covering numerous measures included denuclearization, but also on bringing an official end to the Korean War, which began in 1950. Although fighting ended three years later, the sides failed to reach agreement on a peace treaty.

Song reported that the inter-Korean dialogue has also flatlined, and he blamed “the double-dealing behavior of the South Korean authorities”, as evidenced by joint military exercises conducted with the US.

“The improvement of inter-Korean relations can only be achieved when the South Korean authorities put an end to big-Power worship and the policy of dependence on foreign forces encroaching upon the common interests of the nation and fulfill their responsibility assumed before the nation by implementing the inter-Korean declarations in good faith,” he stated.

On the development front, Song informed that his country is part of the global push to create a better world for all people and the planet.

He said the DPRK is taking efforts to achieve the Sustainable Development Goals (SDGs) “through vigorous struggle to build a powerful socialist country, upholding the banner of self-reliance”.

He further stressed the need for all 193 UN Member States to create a peaceful environment to realize the Goals by 2030.

In this regard, Song expressed his country’s solidarity with nations including Syria, Cuba and Venezuela.