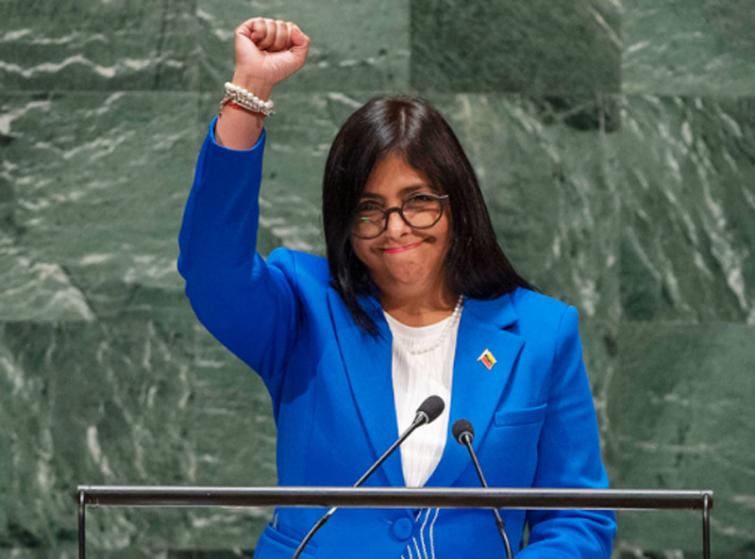 New York: The Vice-President of Venezuela on Friday criticized administrations which have recognized National Assembly president Juan Guaidó as leader of the South American country.

Addressing the UN General Assembly, and without referring to Mr. Guaidó by name, Delcy Rodriguez Gomez called his self-declaration as interim president this past January a “coup d’état” and “an unspeakable twisted stumbling block on our historic path”.

“This Member of Congress is an imperial puppet. He does not exist in Venezuelan politics. He is a criminal element who has been introduced to breach the peace in the Bolivarian Republic of Venezuela,” she said.

“This self-proclamation was followed by recognition by a majority of governments of this unequal world; perhaps one of the worst mistakes in the diplomatic history of these countries.”

Ms. Rodriguez  began her speech by expressing gratitude to speak “in this house of the international community”. Climate action has been one of the major themes of this year’s general debate, where all 193 UN Member States have a voice.

Highlighting international cooperation in preserving the environment “which has been affected by the devastating capitalist model”, Ms. Rodriguez  expressed solidarity with The Bahamas in the wake of Hurricane Dorian and railed against “the barbarous commercialization of the Amazon, led by the President of Brazil”.

The Vice-President said Venezuela also supports the urgent need to fight against poverty and inequality.

However, she noted “a new kind of terrorism” which does not involve weapons but “the dominance of the dollar.”

She said this “economic terrorism” punishes millions in the drive to “enforce doctrines of regime change and to steal the resources of nations”.

“Economic terrorism against Venezuela has caused a nine-fold drop in its income. Between 2015 and 2018, the total losses for the Venezuelan economy reached $130 billion because of the brutal blockade imposed by the United States, which is a shameless robbery of all our resources.”

Ms. Rodriguez said the US has also “flexed its imperialist claws” against “kindred” revolutions in Cuba and Nicaragua.

She called on the US to exert “less arrogance and more tolerance and coexistence with the other free nations of the world.”