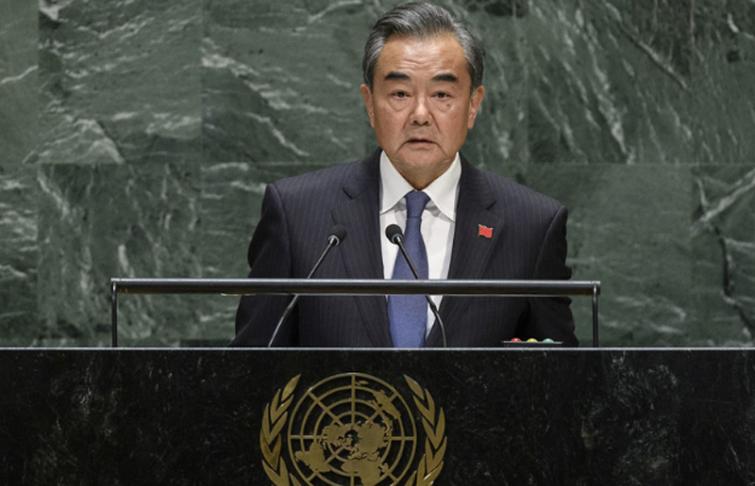 At UN Assembly, China says â€˜it will not ever be cowered by threatsâ€™

New York: In his address to the  UN General Assembly on Friday, the State Councilor and Foreign Minister of China declared that his country will not ever be cowered by threats or subdued by pressure, when facing the headwinds of protectionism.

Wang Yi told the Assembly’s annual general debate that China is committed to resolve trade frictions and differences “in a calm, rational and cooperative manner”, as well as “utmost patience and goodwill.”

However, on Tuesday at the general debate, United States President Donald Trump told the UN that he would not accept a “bad trade deal” with China nor hoped a beneficial deal.

In his response, Mr. Wang stressed that “should the other side act in bad faith…we will have to make necessary responses to safeguard our legitimate rights and interests, and to uphold international justice.”

Spotlighting the marking of the 70th anniversary of the founding of the People’s Republic of China in 2019, Mr. Wang stressed that “850 million Chinese have shaken off poverty, and hundreds of millions have joined the middle-income group.”

On China’s diplomatic achievement, the Foreign Minister said that China had boosted world peace and prosperity through its development.

He reiterated that “China will remain committed to the basic principles of sovereign equality and non-interference in other country’s internal affairs as enshrined in the UN Charter.”

While commenting on rampant unilateralism, Mr. Wang urged the world not to “just sit idly by.” Recognizing the important role that the Intermediate-Range Nuclear Forces (INF) Treaty plays in upholding global strategic balance and stability, he said that unilateral withdrawal would cause multiple negative impact.

“China is opposed to the deployment of land-based intermediate-range missiles in the Asia Pacific,” he said, adding that “China will continue to take an active part in the international arms control process.”

He also addressed hotspot topics such as the Iranian nuclear issue, and he urged it to be “speedily brought back to the track of the JCPOA (the Joint Comprehensive Plan of Action).”

He said that the Gulf countries should be urged to carry out dialogue and consultation, and countries from outside the region should “play a positive role in maintaining security in the region.”

Turning to the Korean Peninsula, Mr. Wang said the opportunity for the political settlement mush not be missed again.

“It is necessary for the Security Council to consider…invoking the rollback terms of the [Democratic People’s Republic of Korea]-related resolutions in order to bolster the political settlement of the Peninsula issue,” he said.

“Only real action will bring hope and create conditions for reaching a final solution toward the Rakhine issue,” he stressed.