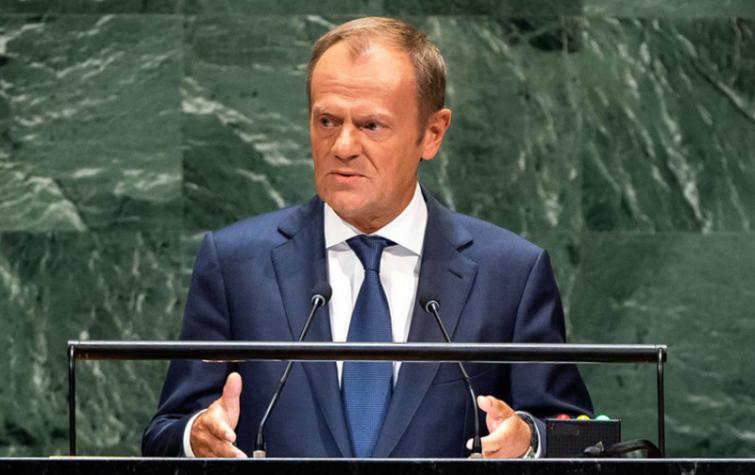 New York: The suggestion by some earlier this week at the UN that there is an immanent conflict between patriotism and globalism “is false and dangerous, even if it has many followers and powerful propagators,” European Council President said on Thursday.

“The very idea of the United Nations, just like that of the European Union, is de facto a heroic attempt to overcome such thinking,” Donald Tusk told the General Assembly, underscoring that: “Patriotism in the  21st century must also have a global dimension, if it is not to become, as has many times been the case, a common national egoism.”

Admitting that the word globalism “doesn’t sound attractive”, Mr. Tusk said “solidarity” was the world he preferred. “In my political vocabulary, globalism and solidarity mean the same thing. And I am not talking about some naive ideology or abstract linguistics, but about concrete challenges and a chance for pragmatic solutions.”

He said that even in the most modern and beautiful cities, in Europe or elsewhere “our life can change into hell, if we do not find, here at the United Nations, adequate solutions to global threats, such as: armed conflicts and terrorism, nuclear proliferation, or the destruction of our environment.”

Mr. Tusk stressed that without a readiness to establish rules on a global level, and later to consistently respect them, local communities, nations and States, and even continents, will remain helpless in the face of those threats.

On what he termed the current “environmental emergency”, he said that microplastics are spreading in the oceans and up to 200 species become extinct each day. “We are fast approaching a point, beyond which we will only be able to mitigate climate change rather than reverse it.”

He vowed that the EU would continue doing everything possible to confront the threats posed by climate change. Europe is showing leadership in implementing the Paris Agreement and hoped to win the race to become the world’s first carbon-neutral continent. In 2017 alone, the EU and its member States spent 20 billion euros helping developing countries tackle and adapt to climate change, he added.

Finally, Mr. Tusk said that it was not just nature and the oceans that deserved protection, but “the truth in public life, freedom, rule of law, and international solidarity.”

For example, he said that to protect the truth, it is not enough to accuse others of promoting fake news. “Frankly speaking, it would be enough to simply stop lying. Today, too many politicians use lies as a permanent method to maintain power.”

“To protect rule of law, you really must accept that law should be above power, not at its beck and call. If you want to follow the principles of international solidarity, you always have to help the weaker,” he said: adding: “If the powerful of our world do not understand this, they will go down in history, not as leaders, but as fake leaders. And rightly so.”