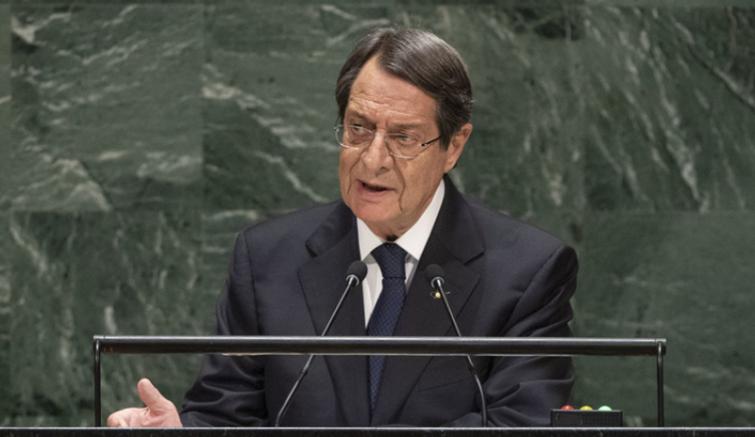 Despite his country’s “sincere efforts and the constructive engagement” towards a settlement, Mr. Anastasiades said: “Cyprus remains the last European divided country”.

Yet he did acknowledge a “glimmer of hope” with a new effort by the UN Secretary-General that could “pave the way forward for the resumption of talks with the sole aim to reach a comprehensive settlement”,

The “vision of the people of Cyprus” he said, is to end the status quo with a state which will ensure common and prosperous future for the coming generations of Greek and Turkish Cypriots.

The General Debate of the @UN General Assembly, when every Member State has an opportunity to address a world audience, continues until Monday.

“I want to send a clear message”, he asserted, “the United Nations and the Secretary-General’s good offices mission is the only way forward for us”.

In his latest report on the UN-facilitated Cyprus talks, the Secretary-General expressed the hope that ongoing consultations “will lead to a return to negotiations, to which I could devote the full weight of my good offices, with the aim of reaching a lasting resolution of the Cyprus issue.”

Turning to the world at large, President Anastasiades remarked that the combination of poverty, lack of adequate educational opportunities, social and economic exclusions and climate change “constitute the most serious problems” faced by billions globally.

For these people, who look to the international community for support, he argued, “we should not only address the root causes that have led to the creation of these challenges, but also reflect on why we have yet to tackle them.

Having failed to effectively tackle these challenges has sparked religious fundamentalism, violent extremism, civil war and ethnic conflicts, among other things.

But “most alarming”, he said, is that the combination of these factors has “led to the forcible displacement of millions of people, unprecedented waves of refugees and migratory flows”.

Flagging that the UN as the “only international forum” where nations can “collectively interact, deliberate and pursue common goals”, President Anastasiades expressed his country’s “strong conviction” that multilateralism, decisive collective action, international co-operation, greater solidarity and stronger partnerships are “the only answer” to eliminate these threats.

“History has repeatedly taught us the catastrophic consequences of not adhering to the principles, rules and synergies we have commonly developed within the framework of the UN”, he stated, reaffirming Cyprus’ “unwavering support” to the Secretary-General’s reform priorities of advancing peacebuilding, humanitarian assistance and long-term development.

Underscoring that “we are at a defining moment as regards climate change”, the President of Cyprus stated that “we collectively carry the obligation” to provide future generations with a greener planet.

“This initiative intends to bring together our regions’ leading scientists and policymakers, with a view to developing practical and achievable solutions that will have durable benefits for our citizens”, he elaborated.