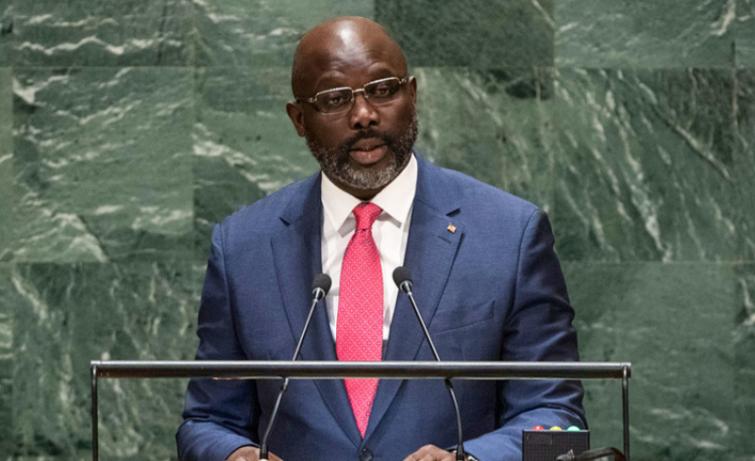 “After being devastated by a brutal civil conflict that lasted for 14 years, peace was restored and maintained by what was then the largest peacekeeping force in the history of this Organization”, he explained.

“Under the auspices of the UNMIL [UN Mission in Liberia] peacekeepers, Liberians enjoyed 16 years of unbroken peace”.

President Weah explained that when the peacekeeping force withdrew two years ago, the Government stepped up to maintain the peace.

“However,” he said, “long after the guns have been silenced, the survivors have to live with the collateral damage of the war-wounded, the shattered families, the displaced populations, the resettlement of refugees, and all the other negative consequences of a national socio-economic fabric that has been torn apart”.

Despite the many challenges the country has endured, Mr. Weah proudly said “our country is today a beacon of democracy in Africa”, with the freedom of press, expression, association and other political and democratic rights respected under the law.

And yet, there is an emerging threat to the country’s “hard-won peace and stability”, he lamented.

“Some individuals, within and outside of our country, particularly those who have lost democratically-held elections, have resorted to incitement, threats of violence, misuse of social media, and hate speech, with the aim and objective of achieving power through undemocratic means”, he detailed, adding “this is unacceptable… we must all learn to respect the mandates of the electorates, even when that mandate is not in our favor”.

‘Faith and confidence’ in the UN

The Liberian President pointed to today as “a time of uncertainty and heightened tension in global politics, security, and trade”.

And yet, despite a global economy is under stress, security tensions on the rise and trade protectionism and climate change causing consequences, especially on developing countries, Weah “strongly” believes in the UN’s ability to “maintain international peace and security, foster friendly relations among nations, and promote social progress, better living standards and human rights”.

“We continue 'to have faith and confidence in the United Nations as the best universal institution to guide the nations of the world in peaceful and harmonious interactions”, he spelled out.

In closing, President Weah assured those in the Assembly Hall that “Liberia will remain engaged as a responsible member of the international community, on all bilateral, regional and multilateral levels.

“We will continue to work with the United 'Nations and its organizations to foster peace, security and harmony among the peoples of the world”, he concluded.