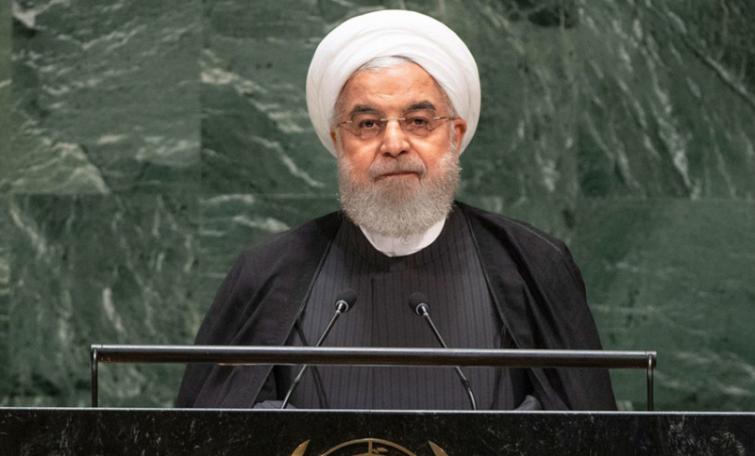 At UN, Iran proposes â€˜coalition for hopeâ€™ to pull Gulf region from â€˜edge of collapseâ€™

New York: The Gulf region is “on the edge of collapse”, Iranian President Hassan Rouhani told world leaders on Wednesday at the annual high-level segment of the United Nations General Assembly, saying that “a single blunder can fuel a big fire”.

“The US and Zionist imposed plans such as the deal of century, recognizing Beit-ul Moqaddas as the capital of the Zionist regime and the accession of the Syrian Golan to other occupied territories are doomed”, he declared.

Further, as he told the Assembly that Iran would not negotiate on the issue of its nuclear program as long as sanctions remain in place.

“Our response to any negotiation under sanctions is negative,” he said.

Moreover, he continued, “we shall not tolerate the provocative intervention of foreigners”, saying “we shall respond decisively and strongly to any sort of transgression to and violation of our security and territorial integrity”.

The alternative and proper solution for Iran, he said, is to “strengthen consolidation among all the nations with common interests in the Persian Gulf and the Hormuz region”.

The message of the Iranian nation, to “invest on hope towards a better future rather than in war and violence”, is “let's return to justice, to peace, to law, commitment and promise and the negotiating table”.

He upheld Iran’s security doctrine as based on “the maintenance of peace and stability in the Persian Gulf” and providing free navigation and safety of movement in the Strait of Hurmoz, which recent incidents have “seriously endangered”.

“I should like to invite all the countries directly affected by the developments in the Persian Gulf and the Strait of Hormuz to the Coalition for Hope meaning Hormuz Peace Endeavor,” stated President Rouhani.

He explained the Coalition’s goal as one of promoting “peace, stability, progress and welfare” for all the residents of the region and enhancing mutual understanding and friendly relations among them.

According to Mr. Rouhani, the initiative includes “various venues for cooperation”, such as the collective supply of energy security, freedom of navigation and free transfer of oil and other resources to and from the Strait of Hormuz and beyond.

The Coalition is based on principles, such as compliance with UN goals and principles, mutual respect, dialog and understanding, and, most importantly, the “two fundamental principles of non-aggression and non-interference in the domestic affairs of each other,” he said.

He did acknowledge that “the presence of the United Nations seems necessary” for the creation of an international umbrella in support of the Coalition for Hope.

“The security of the region shall be provided when American troops pull out”, scorned president Rouhani. “Security shall not be supplied with American weapons and intervention”.

Stressing that after 18 years, the US has failed to reduce acts of terrorism, he maintained that Iran however, “managed to terminate the scourge of Daesh with the assistance of neighboring nations and governments”.

“America is not our neighbor”, he underscored. “The United States is located here, not in the Middle East” and is “not the advocate of any nation” nor “the guardian of any State”.

According to Mr. Rouhani, “stability in the Middle East should be sought inside the region rather than outside of it”.