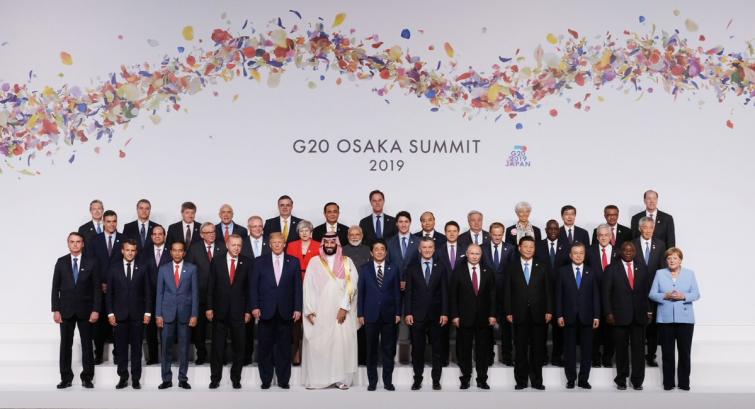 New York, June 29 (IBNS): The annual G20 summit of leaders from the largest and fastest-growing economies, got underway on Friday in Osaka, Japan, against a backdrop of what UN Secretary-General António Guterres described as “a moment of high political tension”.

“We have global warming, but we have also global political warming, and this can be seen in relation to trade and technology conflicts, it can be seen in relation to situations in several parts of the world, namely the Gulf”, he told reporters before addressing the summit, referring to recent attacks on oil tankers around the Strait of Hormuz and the Gulf of Oman, which have heightened tensions between Iran and the United States.

Turning to “uncertainties about the global economy”, he pointed to trade conflicts, high debt levels, potentially unstable financial markets and the risk of global growth slowdown.

In the UN chief’s view, it “will be very difficult to have a breakthrough in relation to some of the most difficult challenges that the international community is facing”.

The Secretary-General spotlighted the urgency of addressing climate changeas a main priority.

Painting a picture of “heat waves in Europe, drought in Africa, storms happening also in Africa and the Caribbean” and a “multiplication” more intense, more frequent natural disasters “with worsening humanitarian consequences” he repeated his passionate refrain that “climate change is running faster than what we are”.

“All the analyses that can be made show the situation, in practical terms, is worse than what we could have forecasted, and the political will has been failing”, he said, calling it “a paradox that needs to be addressed”.

Avowing his belief in climate science, Guterres cited the landmark Intergovernmental Panel on Climate Change (IPCC) report of last October, which spells out that by the end of the 21st Century, temperatures must not exceed 1.5 degrees Celsius  above pre-industrial levels.

This necessitates the world reaching carbon neutrality by 2050, which requires more ambition by governments and others.

He spoke about the UN’s September Climate Action Summit in New York where he will appeal to world leaders for a stronger commitment for climate action, including by “putting a price on carbon, ending subsidies to fossil fuels, [and] not accepting the idea that we still have an acceleration of the construction of coal power plants”, all of which are “absolutely essential to rescue the planet”.

The 2030 Agenda for Sustainable Development is another main challenge where “we are lagging behind”, according to the UN chief.

Countries need to do more, mobilizing their own internal resources, improving their governance, reducing corruption, implementing the rule of law -- UN chief

“If we project the different Sustainable Development Goals(SDGs), the evolution since the beginning until now to 2030, we will be more or less at midway of what the international community has determined when the Agenda 2030 was approved”, he said, arguing the need to accelerate resource mobilization. “Countries need to do more, mobilizing their own internal resources, improving their governance, reducing corruption, implementing the rule of law”.

Guterres highlighted that G20 nations represent 80 per cent of climate change emissions and appealed for a stronger commitment to international financial and economic cooperation.

Iran, China, US and the digital economy

After delivering his prepared text, the UN chief took questions on a variety of subjects, including rising tensions between the United States and Iran, where he reiterated his support for the Joint Comprehensive Plan of Action (JCPOA), commonly known as the Iran nuclear deal.

“I have always believed and will go on believing that the JCPOA is a very important instrument…and it was a factor of stability, and that it will be very important to preserve it”, he stated. “Obviously, it is essential to de-escalate the situation in the Gulf” to avoid a confrontation that “the world couldn’t afford".

When asked to what extent the UN chief held President Trump responsible for disagreements among the G20 leaders, he stressed the importance of dialogue between the presidents of China and the US, saying theirs was “probably the most relevant bilateral meeting that will take place”.

On the digital economy, the UN chief spoke of the recently concluded high-level panel on the digital cooperation, noting the “huge impact” that it – along with artificial intelligence – will have on the global economy.

“We will see a massive destruction of jobs and the massive creation of jobs, but the jobs will be different,” he said, adding that there must be “a strong commitment” by countries to guarantee the education, social protection and job creation needed to “minimize the negative impacts” and “optimize the positive contributions of the fourth industrial revolution”.