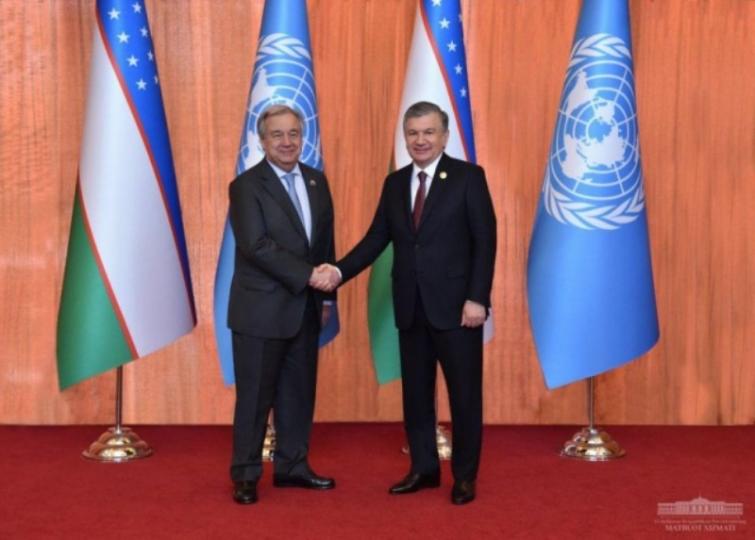 Beijing, Apr 29 (IBNS): President of the Republic of Uzbekistan Shavkat Mirziyoyev met with the United Nations Secretary-General António Guterres, at his residence in Beijing on Apr 26.

This has been reported by the Press Service of the President of the Republic of Uzbekistan.

The Head of the state warmly greeted the Secretary-General and noted that he remembers with special warmth the meaningful conversations with him in Samarkand and New York, which made it possible to strengthen Uzbekistan's partnership with the UN institutions and organizations.

Shavkat Mirziyoyev expressed gratitude to António Guterres for his personal support for Conferences on Central Asia in Samarkand and on Afghanistan in Tashkent, Asian Forum on Human Rights in Samarkand and other events.

The President of Uzbekistan expressed his full support for initiatives and efforts of the Secretary-General on reforming the UN, ensuring international security and stability, and sustainable development. Shavkat Mirziyoyev noted that these reforms will actively contribute to promotion of irreversible reforms in Uzbekistan within the framework of the country's Development Strategy.

António Guterres noted that he was glad to meet the President of Uzbekistan. According to him, Uzbekistan's initiatives has an important place in strengthening international and regional security, further development of education, spirituality, ecology, tourism and other spheres.

Uzbekistan is strongly committed to strengthening relations of trust and good-neighbourliness, expanding mutually beneficial cooperation with countries in the region.

Solutions have been found to the most sensitive issues, and relations with all neighbours have been raised to a qualitatively new level. Over the past two years, trade turnover with neighbouring countries has almost doubled.

International recognition of Uzbekistan's efforts is the adoption of historic resolutions on Central Asia and on Enlightenment and Religious Tolerance by the UN General Assembly. Uzbekistan promotes another initiative – on preparation and adoption of an International Convention on Youth Rights.

Due to the assistance of Secretary-General António Guterres, the activities of Multi-Partner Human Security Trust Fund for the Aral Sea region under the auspices of the UN have been organized. Projects worth more than 3 billion USD have been adopted and are being implemented in this region.

António Guterres highly appreciated the measures taken in Uzbekistan on improving the level and quality of people’s life of the Aral Sea region, construction of modern housing, social and industrial infrastructure, as well as reducing overall negative consequences of the Aral Sea disaster. For five months, protective plantations on more than 500 thousand hectares of dried-up bottom of the Aral Sea were planted, and sand-accumulation furrows on 1.1 million hectares were created here.

It was noted that following the International Conference on Development of Environmental Innovations and Technologies in the Aral Sea region to be held in Nukus in October this year, Uzbekistan intends to initiate a special resolution of the UN General Assembly on the announcement of this region as “Environmental innovations and technologies zone."

In addition, it was noted that in 2020 Tashkent will host International Conference on the execution of the Montreal Protocol on Substances that Deplete the Ozone Layer.

It was noted that early peaceful settlement of the situation in Afghanistan is the key factor in ensuring stability in the region. Uzbekistan actively connects Afghanistan to regional economic cooperation, promotes joint trade, infrastructure and social projects.

António Guterres reaffirmed his readiness to provide all necessary assistance to further expand cooperation with Uzbekistan.