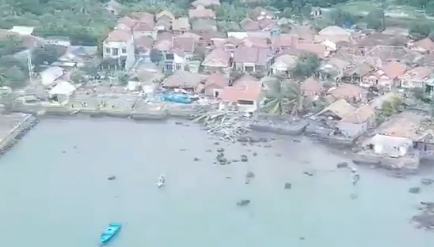 The National Disaster Mitigation Agency (BNPB) said the death toll of the Sunda Strait tsunami has increased to 222 people as of 04.00 p.m. on Sunday, reported Antara news agency.

Agency's spokesman Sutopo Purwo Nugroho told the news agency: "The number of victims and damages might increase as data collection has yet to cover all affected regions."

Hundreds of buildings were destroyed in the area as tsunami waves hit it without any warning.

As per BBC report, officials say the tsunami could have been caused by undersea landslides after Anak Krakatau volcano erupted.

The Sunda Strait is crucial as it connects Java Sea to the Indian Ocean.

"Volunteers have reached Tanjung Lesung for search and rescue," Edi, 40, a resident of Tanjung Lesung, who is also a survivor of the tsunami told Antara news agency on Sunday.

A rescue operation is currently going on.

Lampung regional secretary Hamartono Ahadis was quoted as saying by Antara: "Don't easily trust information saying there will be a tsunami in the city. However, residents should remain vigilant and be careful should the high waves come again."

Speaking on the toll, National Disaster Mitigation Agency (BNPB) spokesperson Sutopo Purwo Nugroho told The Jakarta Post the latest death toll as of Sunday at 1 p.m. was 168 people, with 750 injured and 35 reported missing.

Data from the Banten Disaster Mitigation Agency (BPBD) received by The Jakarta Post reveals that a total of five beaches in Banten's Pandeglang regency were affected by the disaster, namely Tanjung Lesung, Sumur, Teluk Lada, Panimbang and Carita.