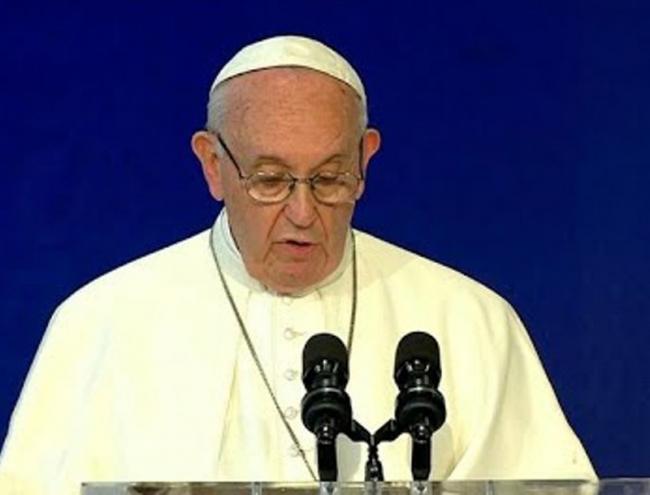 Pope maintains silence after senior Archbishop calls for his resignation

Dublin/Vatican City, Aug 27 (IBNS): Ending his two day Ireland visit, Pope Francis, the head of the Catholic world, chose silence as journalists questioned him about his role in suppressing sexual abuse committed by a former US priest, as alleged by a senior Archbishop.

In his 11-page letter, Archbishop Carlo Maria Vigano said that the Pontiff was aware of deeds committed by Theodore McCarrick, a former US Archbishop, who resigned last month.

Vigano said that Pope Francis knew about it since 2013, but chose to remain silent about it for five years, before accepting McCarrick's resignation earlier this year.

"[The Pope] knew from at least June 23 2013 that McCarrick was a serial predator, he knew that he was a corrupt man, he covered for him to the bitter end," the letter read.

"Pope Francis must be the first to set a good example for cardinals and bishops who covered up McCarrick's abuses and resign along with all of them," it added.

However, Vigano has not been able to provide enough evidence to boost his claim.

When quizzed about the allegations, the Pope told reporters: "I will say sincerely that I must say this, to you, and all of you who are interested: Read the document carefully and judge it for yourselves. I will not say one word on this. I think the statement speaks for itself."

"You have sufficient journalistic capacity to draw conclusions. When a little time has passed and you have the conclusions, perhaps I will talk," he added.

On Sunday, during his Papal visit to Ireland, the Pope condemned sexual abuses faced by victims over the years.

"I ask our Blessed Mother to intercede for the healing of the survivors of abuse and to confirm every member of our Christian family in the resolve never again to permit these situations to occur," he tweeted.

During a mass in Dublin's Phoenix Park, which was attended by thousands, the Pope repeatedly asked for forgiveness.

A staunch Catholic nation, Ireland has witnessed a sea change in attitude pertaining to several issues, such as same-sex marriage, divorce, abortion and contraception.

"...understanding that marriages do not always work, that women should make their own decisions and that families come in many forms," Varadkar said.

He also warned the Pope to take strong actions against the perpetrators.