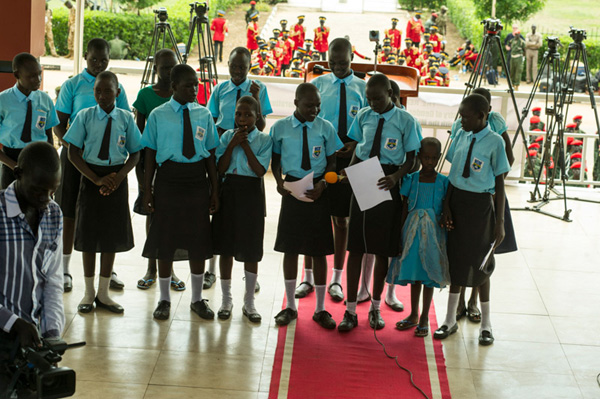 South Sudan: UN officials welcome launch in of campaign to end use of child soldiers

India Blooms News Service | | 30 Oct 2014, 12:23 pm
#South Sudan
New York, Oct 30 (IBNS) The United Nations stands ready to support the Government of South Sudan in its renewed commitment to end the recruitment and use of children in the army, top UN officials declared on Wednesday as the Organization launched a new initiative in the country.

“It’s encouraging to see that the Government is taking steps to protect the country’s children and the United Nations will continue to support them,” said Leila Zerrougui, Special Representative of the Secretary-General for Children and Armed Conflict, in a message read during the launch of the Children, Not Soldiers campaign in South Sudan. “Everyone in South Sudan must know that children have a right to be protected, especially in times of war,” she added in the message. The campaign in South Sudan is led jointly by  Zerrougui, the UN Mission in South Sudan (UNMISS) and the UN Children’s Fund (UNICEF), with the support of other partners. It is part of a larger, global campaign that aims to end the recruitment and use of children by Government security forces in armed conflict by the end of 2016. Six other countries are currently part of a global campaign that was launched this past March, including Afghanistan, the Democratic Republic of the Congo, Myanmar, Somalia, Sudan and Yemen. The countries have been working on signing Action Plans with the UN that detail concrete actions to be taken in support of children involved in armed conflict. Speaking at on Wednesday’s ceremony in South Sudan, Garang Mausoleum, Co-chair of the Country Task Force of the Monitoring and Reporting Mechanism and Representative of UNICEF South Sudan, underscored the importance of the Government’s recommitment this past June to end the recruitment and use of children by the Sudan People’s Liberation Army (SPLA). “War and conflict is not children’s play,”  Mausoleum said. “Using children in conflict has a devastating impact on their lives. These young boys, and sometimes girls, see things that no child should ever see,” he added. In June, the Government of South Sudan formally signed its Recommitment to the Action Plan – first signed in 2009 by the SPLA – that outlines 18 measures the SPLA needs to put in place to make its army free of child soldiers and to end grave violations against children in accordance with international humanitarian law and human rights law. As part of the Recommitment, the United Nations, the National Disarmament, Demobilization, and Reintegration Commission and partners will support and assist in the identification, verification and release of children associated with the SPLA. Children will be given psycho-social services, educational and vocational training and other services aimed at allowing them to resume life in their communities. “Now the real work begins. The commitments have to translate into action,” said Ellen Margrethe Løj, the Special Representative of the Secretary-General for South Sudan. “We look forward to assisting children as they return to their families, their friends and to their education.” In preparation for the campaign’s launch, the Government issued punitive orders for the SPLA to stop deploying children, disseminating radio messages by the Ministry of Defence and submitting legislative amendments to the Ministry of Justice to apply sanctions to the recruitment of children by army commanders. “The Government of South Sudan will no longer allow children to join the military,” said Kuol Manyang Juuk, Minister of Defence and Veteran Affairs in a statement. “Children should be learning how to read and write, not carry weapons – we know education will make us better as a nation,” he noted.

Schoolchildren in South Sudan singing during the national launch of the campaign “Children, Not Soldiers.” Photo: UNMISS