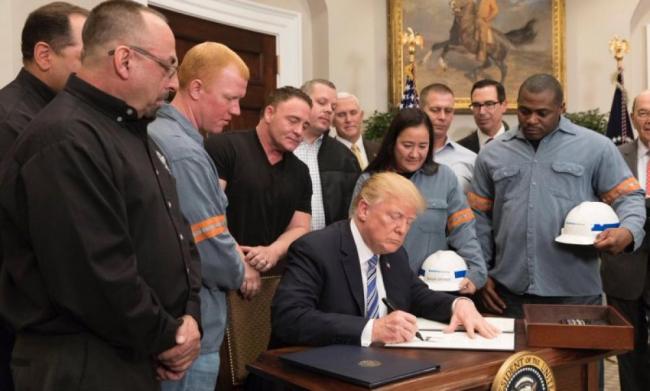 Paris/LondonJun 2 (IBNS): As US trade tariffs came into force, allies France, the UK and Canada have joined hands in condemning American President Donald Trump, stating that the move is absurd and illegal.

Top congressional Republicans too have voiced their disdain.

France's President Emmanuel Macron, who enjoys a healthy relationship with his US counterpart, has condemned the tariffs as illegal.

According to a statement released by the Elysee Palace, Macron has said that the European Union would respond in a 'firm and proportionate manner'.

Trump, however, has said that he did it to protect American steel and aluminium producers, who feel threatened by abundant supply globally.

Mocking Trump, Canada's Prime Minister Justin Trudeau said: "That Canada could be considered a national security threat to the United States is inconceivable."

Mexican Foreign Minister Luis Videgaray has said that his country will safeguard the priorities of Mexicans.

"Mexico's position on trade, or on immigration, or on security, or on whatever area of co-operation with the United States, will not vary, not because of offensive rhetoric nor unjustified unilateral measures like this type. We will continue to defend the interests of Mexico, just as we have done until now," he said.

Paul Ryan, US House Preaker has said that he does not support the decision.

"I disagree with this decision," Ryan, who is due to step down, said.

"Today's action targets America's allies when we should be working with them to address the unfair trading practices of countries like China," he added.

Effective from Friday, the EU, Canada and Mexico will pay taxes of 25 percent on steel and 10 percent on aluminium.

Trump had announced his decision in March, however, with dialogues, the US made some exemptions.

US Commerce Secretary Wilbur Ross said on Thursday that no further exemptions were made as talks with the aforementioned parties didn't progress much thereafter.

Taxes will be applicable to plated steel, slabs, coil, rolls of aluminium, and tubes.

Meanwhile, Canada has said that it plans to levy tariffs of up to 25 percent on about USD 13 billion worth of US products. It is expected to come into force from July 1.

Mexico has said that it will increase duties on steel, pork meat, apples, grapes, blueberries and cheese.

The EU in its retaliation has published a 10-page list of tariffs, some of which includes cast iron, kidney beans etc.

"European firms have said they fear lower US demand for foreign steel will divert shipments to Europe," it said.

The outlet has quoted sources as saying that the "... IHS Markit associate John Anton said he expected the effects to be distributed across a wide range of markets, limiting the effect on prices outside of the US."

"That leaves America to bear the brunt of the economic impact, which economists say will appear in the form of higher prices and job losses - as many as 470,000," the report read.

Steel prices are already going north in the US and are expected to head towards that direction in the coming months, all due to the uncertainty the tariffs have created.