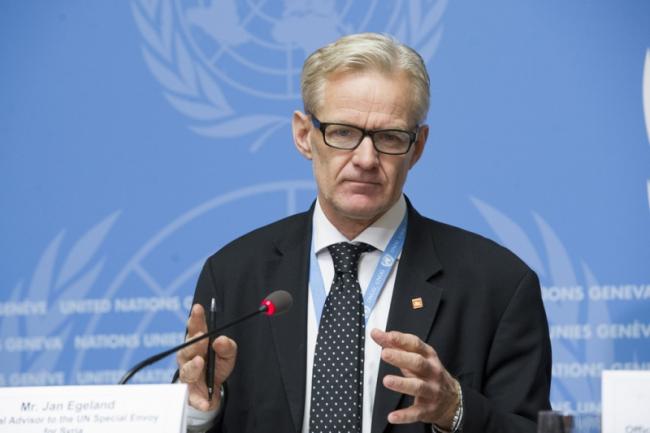 New York, Feb 2 (JEN): Civilians in Syria’s besieged areas have not seen a single convoy of humanitarian aid arrive for a full two months, a senior United Nations adviser said on Thursday, lamenting that diplomatic efforts appear “totally impotent,” and that hundreds of lives are being lost as a result.

Briefing reporters xin Geneva after a meeting of a UN-supported humanitarian task force, Jan Egeland, Special Adviser to the UN Special Envoy, said the most recent aid convoy arrived on the 28th November 2017, in the town of al-Nashibiya, and consisted of aid for only 7,200 people.

Many civilians fleeing conflict areas took refuge in the area of Idlib, where fighting has since flared up, leaving them with little choice but to move on again.

Egeland said that the history of the war in Syria is that of millions of people fleeing for their lives every single year for the past five years, and that the situation is “screaming for a ceasefire.”

“This is a war when armed men are specializing in the suffering of civilian populations and those that are the sponsors, are not able to end it.”

He added that an end to the fighting was essential, and that this would require cooperation from Russia, Iran and Turkey.

Asked if the recent meeting of Syrian parties in the Russian city of Sochi could help the humanitarian situation, Mr. Egeland said he hopes that the meetings will result in progress, adding that it hasn’t so far, but “this is very early days.”