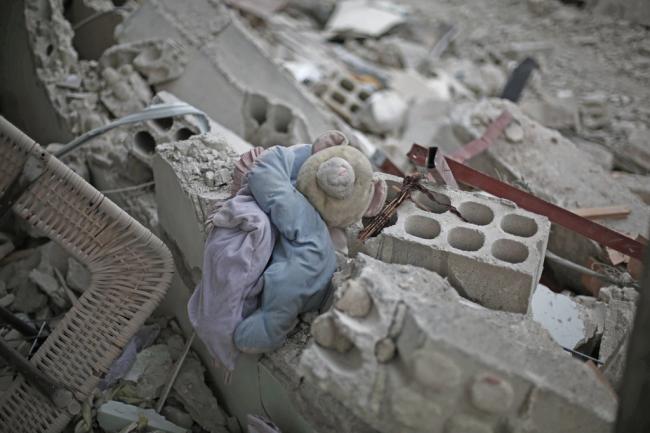 New York, Jan 27 (JEN):  With families in Syria’s besieged northern town of Afrin on the run or hiding in basements to escape intense shelling, the head of the United Nations Children’s Fund (UNICEF) operations in the country has strongly denounced the rising number of child casualties, questioning whether the world is “becoming numb to the killing of children.”

“The grim tally of children killed in Syria in the past two weeks has increased daily as violence escalates in several areas across the country,” Fran Equiza said on Friday in an impassioned statement.

“Nearly seven years into the conflict, children continue to be the hardest hit by unprecedented destruction, displacement and death. They have lost lives, homes and childhoods. Enough is enough.”

According to UNICEF, over the last few days, at least 23 children have reportedly been losing killed as a result of fighting in Afrin, Idlib, Saraqab, Khan Shaykhoun and Damascus.

The attack in Damascus on 22 January, the heaviest in weeks, allegedly occurred as children were leaving school.

Furthermore, families that managed to flee violence in some places are living under extremely difficult conditions and exposed to the harsh winter conditions while others have reportedly been prevented from leaving areas of hostility.

In Afrin, violence is reported to be so intense that families are confined to the basements of their building, after reportedly being prevented from leaving the area.

According to UNICEF, the majority of shops in the district are closed and UNICEF-supported child protection services, including a child-friendly space and psychosocial support activities, had to be suspended.

“Wars have laws and these laws are being broken every single day in Syria,” said Equiza underscoring the need on all parties to the conflict to honour obligations to protect children at all times and to allow safe passage to all people wishing to leave areas under attack.

Meanwhile, the UN Office for the Coordination of Humanitarian Affairs (OCHA) also said Friday that the military campaign in Afrin (north-west Syria) has forced a temporary halt on humanitarian shipments across the border from Turkey into Syria.

According to Jens Laerke, a spokesperson for the UN relief wing, during the past week, 123 trucks have been put on hold.