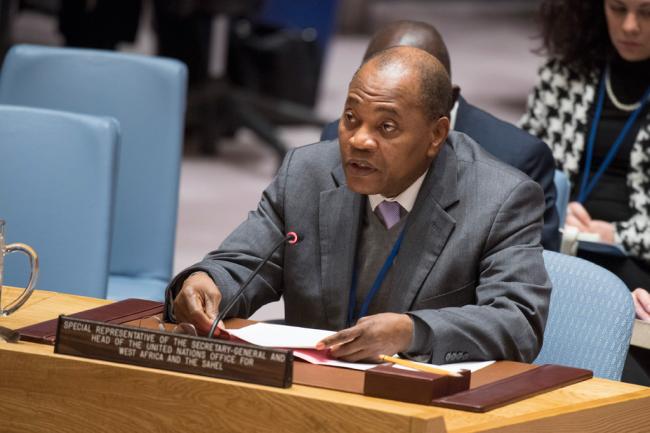 New York, Jan 12 (JEN): The security situation in West Africa and the Sahel remains of grave concern, the United Nations envoy for the region said Thursday, warning that while there had been progress on the political front over the past year, there had also been a worrying upsurge in Boko Haram attacks.

“Following a notable decline in Boko Haram attacks in the first half of the year, there has been an uptick in the number of incidents since September last year, with a peak of 143 civilian casualties alone in November 2017,” said Mohamed Ibn Chambas, Special Representative and Head of the UN Office for West Africa and the Sahel (UNOWAS).

In his repotrted a fivefold increase in the use of children as suicide bombers by Boko Haram, reaching some 135 cases in 2017.

Updating the Council on Mali, he said that terrorists launched a complex attack on the UN Multidimensional Integrated Stabilization Mission’s (MINUSMA) positions in Kidal, which resulted in one peacekeeper’s death, while three Malian soldiers were killed by a landmine and another by terrorists in Niono. Additionally, two separate attacks on security posts were registered in Burkina Faso near the Malian border.

“The attacks in Mali as well as within the Mali-Niger-Burkina Faso tri-border area are mainly attributed to A1-Qaida affiliated groups and the Islamic State in the Greater Sahara,” he stated.

Turning to Niger, he noted that because of an increasing number of security incidents, the government has dedicated 17 per cent of 2018 public expenditure to the security sector – compared to 15 per cent last year.

“This has, however, triggered demonstrations in Niger’s capital given the expected detrimental effects on the delivery of social services,” he asserted.

The UN envoy pointed out that while 700 Boko Haram abductees have recently escaped, the group continues to kidnap people and that, overall, more than two million displaced persons “desperately” await an end to the Lake Chad Basin crisis.

Commending the efforts of the Multinational Joint Task Force operating in the region, he stressed that the comprehensive response of the region to address the Boko Haram threat “must be supported by the international community.”

He explained that in the Sahel, the Group of Five (G5) – Burkina Faso, Chad, Mali, Mauritania and Niger – had made significant progress in operationalizing its Joint Force, including by establishing its military command structure and Force headquarters in Sevarÿ and conducting its first military operation with French troops in late October.

Additionally, in line with Security Council resolution 2391(2017), consultations among the UN, European Union (EU) and G5 are ongoing regarding the conclusion of a technical agreement on supporting the Joint Force through MINUSMA.

“The past six months have seen substantive progress in the efforts to reinvigorate UNISS,” he said, noting that a support plan would be shared with national, regional and international partners to harmonize approaches and canvass for effective support to the Sahel “in line with national and regional priorities, the UN Agenda 2030 and the AU Agenda 2063.”

Meanwhile, he noted that migration has become one of the most lucrative activities for criminal networks across West Africa and the Sahel.

“Stemming human trafficking must continue to be a top priority in 2018 as recently underscored by Secretary-General Guterres,” he affirmed.