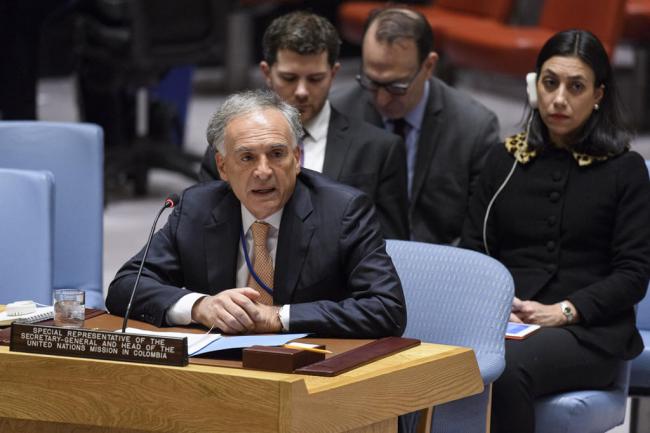 New York, Jan 11 (JEN): Colombia's peace efforts remain challenged by the task of reintegrating 14,000 former rebel combatants, the top United Nations official in the country said Wednesday as he also reported to the Security Council that the UN will 'closely follow' reports of a just-broken ceasefire between the National Liberation Army (ELN) and the Colombian Government.

“While the building blocks of stabilization are being put in place, we cannot lose sight of the challenges of reintegration,” Jean Arnault, the Secretary-General's Special Representative, told the Security Council, presenting the first quarterly report on the activities of the UN Verification Mission in Colombia, which he heads up.

The mission, which started its operations on 26 September 2017, was established to verify the commitments of the Government and the Revolutionary Armed Forces of Colombia-People's Army (FARC-EP) on reintegrating former FARC-EP members into society, and on ensuring security in territories most affected by the decades-long conflict, which was ended with a peace deal between the two sides in November 2016.

Arnault said that the political reintegration of the former guerrilla organization is on course, noting that the upcoming parliamentary and presidential elections this year and local and departmental elections in less than two years will be an opportunity for the new FARC party to gain seats.

“But we continue to view with concern the socioeconomic reintegration of the 14,000 former combatants,” he said, explaining that many of them are still in prison and are extremely frustrated with the reintegration process.

President Juan Manuel Santos Calderón has taken the important step of recognizing the need for access to landownership as a major incentive for reintegration.

For their part, many FARC members have demonstrated on the ground that they are willing and able to engage in agriculture, environmental protection and crop substitution.

These are promising developments, but only that. The next few months must be the opportunity to “turn the corner,” and make a fragile process more durable.

Regarding a temporary ceasefire between the Government and the National Liberation Army (ELN), Arnault stressed that the clamor for the continued suspension of military action has been unanimous, and reiterated the need to preserve the lower level of violence as seen in the past three months, while also advocating for a clearer and more reliable ceasefire.

“Unfortunately, it was just announced that attacks against pipelines by the ELN have just resumed. We will follow closely developments and keep the Council informed,” Arnault said.

Meanwhile, UN Spokesman Stéphane Dujarric told reporters in New York that the Secretary-General will be travelling to Bogotá, Colombia, on 13 January to support peace efforts.

On Saturday, Guterres will meet with the President, officials of the Government and armed forces, as well as with the leadership of the FARC and the Catholic Church.

On Sunday, the Secretary-General will travel to Meta Department, where his agenda will include a visit to a territorial area for training and reintegration of former FARC combatants.

Asked if the UN chief will meet with the ELN, Dujarric said “we're concerned by the incident this morning – an attack on an oil pipeline. We're obviously following the developments very closely and we're keeping the Security Council informed.”