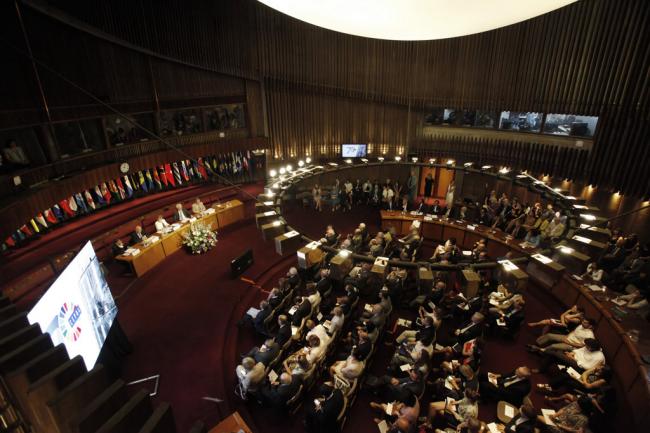 New York, Jan 11 (JEN): The United Nations Economic Commission for Latin America and the Caribbean (ECLAC) celebrated its 70th anniversary on Wednesday with a high-level seminar at its headquarters in Santiago, Chile, reaffirming its commitment to working for the dignity and well-being of all the region's inhabitants.

“This new anniversary gives us the opportunity to revitalize our mission and reaffirm our commitment to the values that underpin our daily work,” ECLAC Executive Secretary Alicia Bárcena told the seminar.

“Now is the time to grow to be more equal, and be more equal to grow. We must break with the culture of privileges, which is manifested in tax evasion and avoidance as well as in illicit capital flows. Equality strengthens democracy and helps in the provision of public goods,” she added.

ECLAC is one of the five regional commissions of the United Nations. It was founded with the purpose of contributing to the economic development of Latin America, coordinating actions directed towards this end, and reinforcing economic ties among countries and with other nations of the world.

Iglesias recalled the difficult years during the 1970s that ECLAC's leadership had to face, above all in its relationship with the host country, when even the organization's very existence was threatened.

“ECLAC was the first institution created to think about development problems in their comprehensiveness, based on direct knowledge of the realities in the countries that it serves,” he said.

“Moving toward the future, ECLAC must prepare itself for a new world dominated by technological transformations, climate change and growing unsatisfied social demands, while also continuing to fight for greater equality, which has been the central theme of this institution throughout its history,” he added.

Meanwhile, Rosenthal stressed the need for the organization to adapt to new times and realities. “ECLAC must 'accommodate itself' to these changes and it has the tools to do so,” he emphasized.

For his part, Ocampo reviewed the importance of the Commission's contributions in five specific areas: the fiscal compact and macroeconomic management vis-à-vis capital movements; productive development in open economies, which emphasized the relevance of integration and technological development; social development, which placed rights-based social policies as the top priority; the reincorporation of issues related to environmental sustainability in all its main reports; and participation in international debates.

“ECLAC is on Wednesday the principal research center in the entire UN system. No other organization compares to it, above all in terms of the quality of its analyses,” said Ocampo, who held high-level posts in other international institutions over the course of his professional career.

Machinea recalled that Raúl Prebisch, a renowned Argentine economist who was ECLAC's main inspiration and its second Executive Secretary (1950-1963), had an extraordinary vocation for development issues.

“He knew how to maintain his intellectual autonomy, was the first person to defend the application of counter-cyclical policies and constantly sought to have analysis and action interact,” Machinea said.

“Moving toward the future, Latin America and the Caribbean will need integration more than ever and to continue fomenting a productive transformation with equality,” he said.

“The main risk currently is the global uncertainty in which we live: there are threats of a new financial crisis which, on top of protectionist trends and xenophobia, could have grave consequences. In the region we must save during the good years and insist on counter-cyclical policies that allow us to better confront future difficulties,” he added.

The commemoration of ECLAC's 70 years in existence will continue throughout 2018 with different events to be held both in Santiago as well as at the institution's other headquarters.