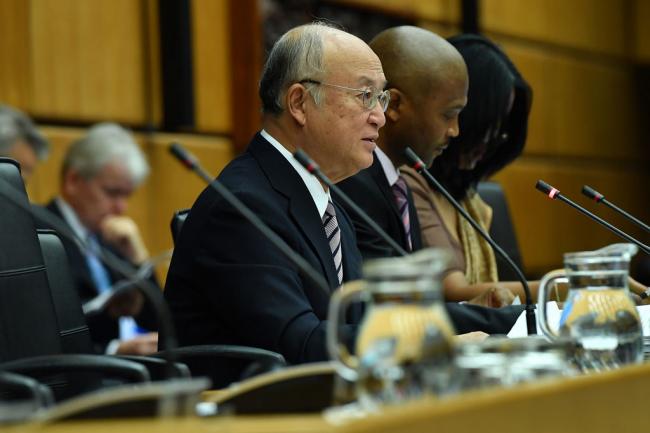 “There were indications at the Yongbyon Experimental Nuclear Power Plant suggesting that the reactor was being operated, [and] at the Yongbyon Nuclear Fuel Rod Fabrication Plant, there were indications consistent with the use of the reported centrifuge enrichment facility,” said Yukiya Amano, the Director General of the UN International Atomic Energy Agency (IAEA), at the agency’s Board of Governors meeting in Vienna.

“The continuation and further development of the nuclear programme of the DPRK are a cause for grave concern.”

Noting that the IAEA continues to closely follow developments in the country’s nuclear programme, the Director General said that the UN agency is enhancing its efforts to monitor and verify nuclear-related developments, including through ensuring the availability of appropriate verification technologies and equipment.

Turning to other areas, Amano said that the nuclear-related commitments undertaken by Iran under the Joint Comprehensive Plan of Action are being implemented and that the IAEA continues to verify the non-diversion of nuclear material declared by the country under its Safeguards Agreement.

“We will continue to implement the Additional Protocol in Iran, including carrying out complementary accesses to sites and other locations, as we do in other countries with additional protocols,” he noted.

On the implementation of the Treaty on the Non-Proliferation of Nuclear Weapons (NPT) Safeguards Agreement in Syria, the IAEA Director General said that the agency’s assessment remains that it was “very likely” that the building destroyed at the Dair Alzour site in 2007 was a nuclear reactor that should have been declared as such by Syria under its Safeguards Agreement.

“I renew my call on Syria to cooperate fully with [IAEA] in connection with unresolved issues related to the Dair Alzour site and other locations,” he urged.

Also in his statement, Amano spoke of the agency’s technical cooperation programme, including its work to contain the outbreak of the fruit fly pest in the Dominican Republic and efforts to conserve ground water and protect it from pollution in the Sahel region, as well as its work on nuclear applications, and on nuclear safety and security.