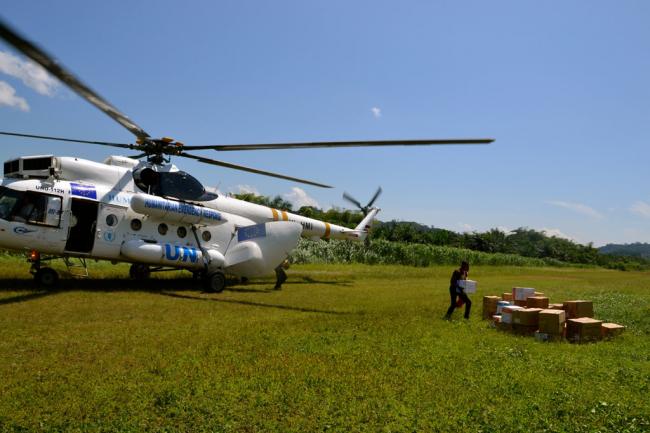 'Civilians are Not a Target,' says UN chief on World Humanitarian Day

India Blooms News Service | | 20 Aug 2017, 07:49 am
#Civilians, # UN, # World Humanitarian Day
New York, Aug 20(Just Earth News): On World Humanitarian Day, the United Nations and its partners are calling on all global leaders to do everything in their power to protect people caught up in conflict, and to stand with the health and aid workers who risk their lives to help them.

“Let the world know: Civilians are Not A Target,” underscored Secretary-General António Guterres in his message on the Day.

“On this day, we also take a moment to honour the brave health and aid workers who are targeted or obstructed as they set out to help people in need, and pay tribute to the government employees, and representatives of international organizations and agencies who risk their daily lives to provide humanitarian aid,” he added.

Despite broad efforts, civilians – including medial and humanitarian workers – continue to bear the brunt of intense conflicts around the world.

“They are attacked and their access obstructed, while humanitarian supplies and hospitals are looted by fighting parties. In addition, in cities like Juba and Aleppo, housing, markets, schools and vital civilian infrastructure are destroyed,” Mr Guterres elaborated.

“No one is winning these wars. We are all losing,” stressed the UN chief.

The Secretary-General invited everyone “to stand with us in solidarity with civilians in conflict, and with the health and aid workers who risk their lives to help them. Get involved with our online campaign at #NotATarget.”

“On World Humanitarian Day, let us commit to doing everything in our power to protect women, girls, men and boys in the line of fire, and to give them hope of a better future,” he concluded.

Meanwhile, the World Food Programme (WFP) commended the dedication and courage of its colleagues working on the frontlines of hunger, often at great risk to their own personal safety, to ensure that children and their families have enough to eat.

“Humanitarian workers go where the need is, and far too often that is where conflict is as well,” said David Beasley, WFP Executive Director, in his message commemorating the Day.

“Fighting and violence drive 80 per cent of all humanitarian needs, and 10 of WFP's 13 largest food assistance operations are driven primarily by conflict,” he continued, noting that in Nigeria, Somalia, South Sudan and Yemen, more than 20 million people are on the brink of famine.

“Increasingly, those involved in the conflicts in these areas are targeting aid workers,” he added.

“On World Humanitarian Day, we come together to reaffirm that civilians caught in conflict and those who care for them are #NotATarget. We appeal to world leaders to take action to protect them and to deliver on the promise of our mutual, shared humanity,” concluded Beasley.

For its part, the UN gender empowerment entity offered full support to the UN's #NotATarget campaign, pointing out that violations of international humanitarian law have generated a global protection crisis.

“Every day, young girls are increasingly exposed to early and forced marriage and young boys are forcibly recruited into armed groups,” said UN Women in a statement marking the Day.

According to UN Women, some 60 per cent of preventable maternal deaths take place in conflict, displacement or natural disaster settings; girls are two and a half times more likely to be out of school in conflict countries; and a reported one in five refugee or displaced women experience sexual violence, with the actual numbers potentially much higher.

“Women are the leaders in their families, communities and societies who drive effective responses to crisis. And it is women and girls who have insights into what is needed and what works, which must inform effective humanitarian response,” said UN Women.

“On World Humanitarian Day, we must come together to change the status quo – for women and girls, and for all civilians caught up in crises,” concluded the statement.

During a special event yesterday at UN Headquarters in New York, Under-Secretary-General for Humanitarian Affairs and Emergency Relief Coordinator Stephen O'Brien spoke of the challenges faced by aid workers around the word.

“Last year, 288 aid workers were targeted in 158 attacks. In the past three months alone, relief workers have been shelled and shot at, kidnapped and killed in Afghanistan, the Central African Republic, the Democratic Republic of the Congo, Kenya, Somalia, South Sudan and Syria,” he said. “This is blatantly unacceptable.”