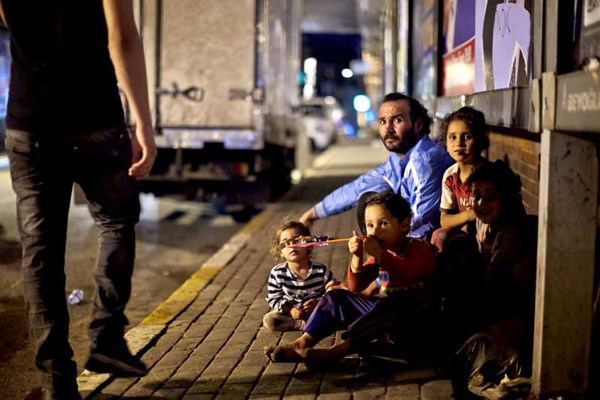 India Blooms News Service | | 30 Aug 2014, 11:38 am
#Number of Syrian
New York, Aug 30 (IBNS) Three million Syrians will have registered as refugees outside of their country on Friday, the UN refugee agency reported, amid accounts of increasingly horrifying conditions inside their homeland â€“ cities where populations are surrounded, people are going hungry and civilians are being targeted or indiscriminately killed.

A news release issued by the UN High Commissioner for Refugees (UNHCR) said that a further 6.5 million people are displaced within Syria, bringing to almost half of all Syrians who have been forced to abandon their homes and flee for their lives. One in every eight Syrians has fled across the border, fully a million people more than a year ago. Over half of those uprooted are children.

“The Syrian crisis has become the biggest humanitarian emergency of our era, yet the world is failing to meet the needs of refugees and the countries hosting them,” said High Commissioner for Refugees António Guterres.

And UNHCR Special Envoy Angelina Jolie said: “Three million refugees is not just another statistic. It is a searing indictment of our collective failure to end the war in Syria.”

UNHCR Spokeswoman Melissa Fleming told a press briefing in Geneva on Friday that increasing numbers of families are arriving in a shocking state, exhausted, scared and with their savings depleted. Most have been on the run for a year or more, fleeing from village to village before taking the final decision to leave their country.

The vast majority remained in countries neighbouring Syria, with the highest concentrations in Lebanon (1.14 million), Jordan (608,000) and Turkey (815,000), according to UNHCR.

In addition to the 3 million registered refugees, governments estimated that hundreds of thousands more Syrians had sought sanctuary in their countries with more than four in five refugees struggling to make a living in towns and cities outside of camps, with 38 per cent living in sub-standard shelter, according to a recent survey.

Syrians are now the world’s largest refugee population under UNHCR care, second only in number to the decades-long Palestinian crisis. The Syria operation is now the largest in the agency’s 64-year history.

Jens Laerke, Spokesman for the UN Office for the Coordination of Humanitarian Affairs (OCHA), stated that more than 191,000 had lost their lives since the beginning of the conflict in March 2011. Even that high number was considered a conservative estimate with the real death toll likely to be much higher, he said.

He said the advance of Islamic State (IS) militants into central Syria had taken violence against civilians to a whole new level as the group continued to commit horrific atrocities against those opposing its rule. There had also been an increase in the use of barrel bombs by Government forces in Aleppo while Islamist militants had cut off the water supply to an area for displaced people, also in Aleppo, on several occasions. That kind of collective punishment was clearly a breach of some of the most basic principles in international humanitarian law.

Overall, nearly 11 million people are in need of aid in Syria and 4.7 million of them live in areas that are hard to reach. There are still some 241,000 under siege in various locations.  Laerke informed that the UN has now sent nine shipments to Syria from neighbouring countries and more are planned over the following month.

UNHCR said there are worrying signs that the journey out of Syria is becoming tougher, with many people forced to pay bribes at armed checkpoints proliferating along the borders. Refugees crossing the desert into eastern Jordan were being forced to pay smugglers hefty sums (ranging from $100 per person or more) to take them to safety.

Fleming said that UNHCR is also deeply concerned for the well-being of several hundred Syrians trapped inside a refugee camp in Al Qa’im, Iraq, after UN agencies and international non-governmental organizations were forced to abandon their offices and warehouses.

While donors had contributed more than $4.1 billion to successive regional response plans since 2012, more than $2 billion more is needed by the end of 2014 alone to meet the urgent needs of refugees.

“The response to the Syrian crisis has been generous, but the bitter truth is that it falls far short of what’s needed,” said  Guterres.

The parents and children of this Syrian family sleep on the streets of Istanbul in Turkey. They are among the 3 million refugees from Syria, many of whom live in desperate conditions. Photo: UNHCR/S. Baldwin