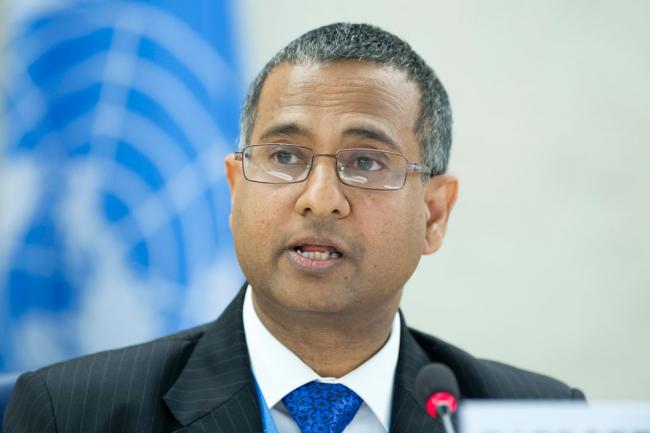 India Blooms News Service | | 09 May 2017, 11:38 pm
# UN, # brutal murder, # journalist, # rights defender, # Maldives
New York, May 9 (Just Earth News): A group of United Nations human rights experts have â€œstronglyâ€ condemned the murder of a prominent journalist and human rights defender in Maldives and called on the authorities to conduct a public inquiry into the killing and bring those responsible to justice.

Yameen Rasheed – an outspoken critic of the Government who wrote about alleged public corruption and human rights violations – was found stabbed in the stairway of his home in the capital, Malé, on 23 April.

“We strongly condemn the killing of Rasheed and we urge the Government of the Maldives to take action now to promote and protect the rights of their people to express their views freely,” the experts said in a news release issued by the Office of the UN High Commissioner for Human Rights (OHCHR).

Rasheed was also at the forefront of a campaign calling for accountability over the disappearance of another journalist and human rights defender, Ahmed Rilwan, who has not been seen or heard from since 8 August 2014.

According to OHCHR, he had received numerous death threats, which he had reported to the police, but apparently no action was taken to protect him.

This murder is the latest in a series of attacks against journalists and human rights defenders expressing liberal views. The killings come against a backdrop of rising religious intolerance in the Maldives and reports suggest that most of the attacks have gone unpunished.

In the news release, the rights experts recognized that the Maldivian authorities have started an investigation and arrested two individuals.

However, they stressed that the “extreme seriousness” of the attack warranted “a thorough and independent public inquiry […] bringing to bear all of the resources of law enforcement and focusing on Rasheed's murder and the disappearance of Rilwan.”

Government has to 'take active steps' to promote tolerance – experts

Further in the release, the experts also noted that the island nation's authority must take seriously their obligation to promote a free and safe space for all forms of expression.

On 27 April 2017, four days following his statement condemning the murder of Rasheed, the President of Maldives reportedly stated in a public meeting that any speech that mocks Islam cannot be tolerated or protected under freedom of expression, read the release.

“It is the Government's responsibility,” the UN experts emphasized, “to take active steps in law and practice to promote tolerance.”

They also voiced concern over a legislation that uses religion and social norms to restrict freedom of expression in ways that are incompatible with the obligations of the Maldives under international law.

“We call on the Government to revise this legislation and other restrictive measures and to show a sincere commitment to human rights and democracy,” they stressed.

Special Rapporteurs are appointed by the Geneva-based UN Human Rights Council to examine and report back on a specific human rights theme or a country situation. The positions are honorary and the experts are not UN staff, nor are they paid for their work.