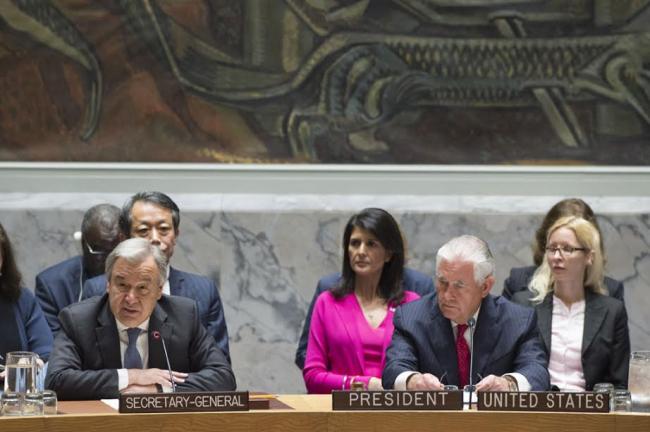 “Armed conflict in north-east Asia, which is home to one fifth of the world's people and gross domestic product, would have global implications,” warned Guterres at a ministerial-level meeting to discuss the DPRK's accelerated nuclear and ballistic missile activities. The meeting was chaired by Rex Tilerson, Secretary of State of the United States, which holds the Council's presidency for the month.

Its launches using ballistic missile technology have included tests of short-, medium-, intermediate-range and submarine-launched ballistic missiles, as well as the placement of a satellite in orbit, he added.

“The DPRK is the only country to have conducted nuclear tests this century. We must assume that, with each test or launch, the DPRK continues to make technological advances in its pursuit of a military nuclear capability,” he said, citing DPRK leader Kim Jong Un's description of his country as a “responsible nuclear-weapon State” and a recent statement by a delegate that “going nuclear armed is the policy of our State.”

Guterres said he is alarmed by the risk of a military escalation in the region, including by miscalculation or misunderstanding, and is particularly concerned by the possibility that efforts to offset the destabilizing activities of the DPRK could also result in increased arms competition and tensions, further impeding the ability of the international community to maintain unity and achieve a peaceful solution.

“The onus is on the DPRK to comply with its international obligations. At the same time, the international community must also step up its efforts to manage and reduce tensions,” the UN chief stressed.

That means the DPRK refraining from further testing, complying with the relevant Council resolutions, and exploring the resumption of dialogue.

That also means reopening and strengthening communication channels, particularly military to military, to lower the risk of miscalculation or misunderstanding, and all Member States implementing relevant Council resolutions.

The Council has important tools at its disposal, from targeted sanctions to communication channels, he added.

Turning to the humanitarian situation in the DPRK, the Secretary-General noted that 13 UN agencies and international non-governmental organizations (NGOs) operating in the DPRK are calling for $114 million to meet the urgent needs of 13 million especially vulnerable people – half the country's population.

He also called on the DPRK authorities to engage with UN human rights mechanisms and with the international community to address the grave human rights situation and improve the living conditions of its people.